Energy. The Convent de Sant Agustí community centre will be the first municipal building offering citizens the chance to invest in local solar energy. The crowdlending system means investors will get their money back.

The Convent de Sant Agustí community centre will be the first municipal building offering citizens the chance to invest in local solar energy. The crowdlending system means investors will get their money back.

Barcelona City Council, via the public company Tersa, has started a crowdlending campaign to fund the construction of a solar panelling installation at the Convent Sant Agustí community centre, an iconic facility in the city.

The campaign is the first of this kind promoted by the City Council and uses the Ecrowd! platform, which specialises in this type of funding. Anyone interested in investing in the project has until 22 June to contribute.

The crowdlending project aims to raise the € 105,000 needed to fund the solar power installation, to be located on the rooftop of the Convent Sant Agustí community centre. The planned solar panelling will have a power rating of 32kWp, generating an annual total of 38,880kWh of electricity (equivalent to the power consumption of 17 households), which will be for self-consumption, helping to power the building itself. The installation is expected to generate an annual saving of 14,700 kg of CO2eq in greenhouse-gas emissions.

The formula chosen, crowdfunding, enables citizens to lend money and gradually get it back with interest. This is an innovative form of collective investment, which differs from crowdfunding in that that participants get back the money they invest.

In this case, citizens investing money to fund the solar rooftop at the Convent Sant Agust will get their money back with a nominal annual interest rate of 0.95% (of the capital not returned) in six-monthly quotas of capital and interest over a five-year period. The minimum investment people can make is € 50 and the maximum is € 3,000.

The crowdlending platform will operate the campaign for 90 days (from 25 March to 22 June).

Using the slogan “Comparteix el sol” (share the sun), the communication campaign which gets under way today aims to encourage people to take an active role in the construction of a more sustainable new energy model for the city. The sun plays a central role in this new energy model as it is the main source of energy for the Earth and Barcelona gets a high number of hours of sunlight throughout the year.

The crowdlending campaign is part of the city’s programme to promote the solar generation, which aims to boost the number of renewable energy installations in the city on public and private rooftops alike, getting not only the local administration involved, but also members of the public, private companies and other groups to make it possible between everybody. 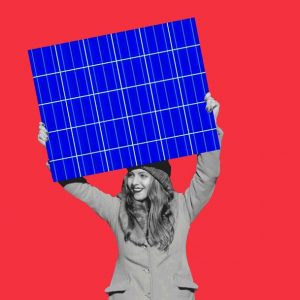