"Today, the separation between humanistic and scientific culture cannot be maintained"

Interview in depth with Judit Carrera, Director of the CCCB 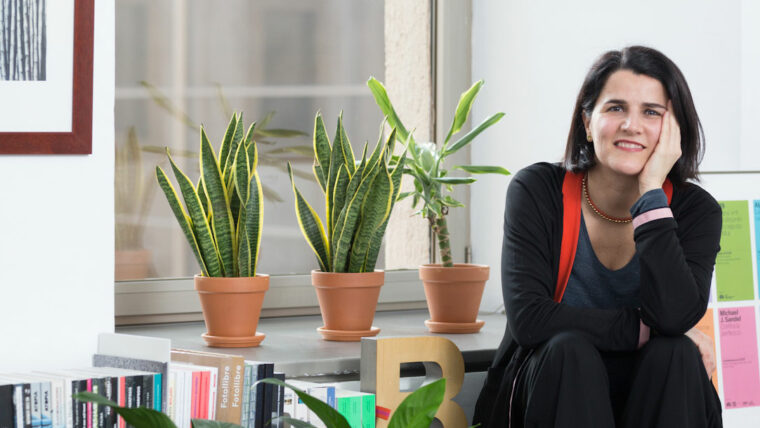 She focuses her interest on critical thought, culture and everything to do with the contemporary world. She chose Political Science as a degree that opens more doors than it closes, and after doing a postgraduate course in Paris and working at UNESCO for a period of time, she returned to Barcelona, where she began her adventure at the Centre of Contemporary Culture of Barcelona (CCCB), where she has been director since 2018.

We talked to Judit Carrera about the role of science and technology as key elements of today’s culture and their links with society.

How have you experienced these years as director?

They have been very exciting, intense and complex; it was not foreseen that there would be a global pandemic involved. They have been years of much learning, of much activity and vocation, of public service and also of leadership of a great team, that of the CCCB. It is an honour and a source of pride to represent it.

What goals did you set for yourself when you took office?

For me, the CCCB is a success story of a very unique institution. The CCCB is a centre for critical debate on the contemporary world through different cultural languages, based on interdisciplinarity and aspiring to be a crossroads of worlds. When I started as director, I took on this legacy with the desire to bring it up to date with some of the issues that mark contemporary society, which perhaps were not so present when the centre was founded in 1994.

Posthumanism, as defined by the philosopher Rosi Braidotti, consists of taking on the legacy of the European Enlightenment to incorporate, among other things, reflection on the great challenges of scientific and technological progress, such as those linked to robotics, artificial intelligence and nanotechnology. These advances are radically transforming the very notion of the human condition, something that the classical humanities had never considered. Today you cannot understand human nature without separating it from all these fields that are causing a very important qualitative leap in what it means to be human.

I think it is relevant to do so from the critical viewpoint of the humanities and to put it in the agora to analyse its potential, but also the difficulties and challenges it poses at that moment.

Over all these years, how has the CCCB impacted on the local environment?

Barcelona and the Raval is our place, the environment in which we were born. We are very aware of the neighbourhood and the city where we are inserted and of the multiple ecosystems of which we are a part. The CCCB is born of this reality and our function is to be a mirror and at the same time a driving force of the city that welcomes us. Our role is twofold: to reflect the impulses and major axes of debate in our society, while at the same time proposing new ones and participating in global debates on the great contemporary challenges. For us, being deeply rooted in the local environment is compatible with being an internationally open centre. I believe that the CCCB’s trajectory demonstrates this.

The CCCB is clearly committed to science.

We are a humanities centre and we don’t want to give up being one, but with today’s scientific and technological transformations, the separation between humanistic and scientific culture can no longer be maintained. There must be spaces that link the two traditions in this far-reaching revolution we are living through.

At what point does this interest arise?

Technology has caused the most profound and radical transformation of culture in the last twenty years. It has radically changed the way culture is created, shared, distributed and accessed. At the CCCB, for many years we have promoted reflection on the Internet and its impact. Then we incorporated the advances linked to science that are causing a radical change in the notion of the human condition. To this, we must add the climate crisis. So the interest arises from the combination of two factors: this new industrial revolution linked to science and technology, and the idea of the Anthropocene, according to which our ecological footprint has passed its limit.

This double confluence has meant that, without abandoning the traditional view of the humanities, we have incorporated the need to take scientific knowledge out of the laboratory in order to debate it critically, disseminate it and bring it closer to the public. In this way, we try to meet this need and provide tools to face the scientific and technological challenges that lie ahead of us.

In this line you have made exhibitions such as Big Bang Data, Human+, Mars. The Red Mirror or Science Friction. How do you think that people from fields such as art and science have coexisted in projects like this?

It has been a very fruitful dialogue that has gone from strength to strength. Perhaps at the beginning there was some reluctance to mix disciplines, but there is a growing interest from people in both the artistic and scientific fields in opening new doors. The pandemic has shown that knowledge cannot be compartmentalised, but that a very broad view is needed. The pandemic is not just the virus; it is the result of a confluence of ecological, social, economic and geopolitical factors in a fully interdependent world. It is essential to have interdisciplinary spaces. The world is proving right.

What has been the public’s response to exhibitions such as Quantum, which includes concepts that are difficult to understand?

Quantum was probably the most difficult project in the history of the CCCB and at the same time it was a very pleasant surprise. It attracted more than 90,000 people and all the activity we did around the exhibition on a subject as complex and counter-intuitive as quantum physics was also very well received.

The reception has confirmed that all these scientific and technological challenges arouse fascination and curiosity. Therefore, it demonstrates the social need to find spaces where these questions can be debated and discussed critically, without any apriorism, without any previous frontiers of knowledge.

Why do we still find it difficult to perceive science as part of our culture?

It is an ancestral separation between what is nature and what is culture. It is also true that there have been great Renaissance artists who have linked the two, but in the collective imagination there is still a strict separation.

However, I believe that this is changing and that interest in the scientific subjects I mentioned earlier for a general or more humanistic public has been growing.

What has driven this change?

The importance of current scientific and technological advances has played an important role. I also believe that Catalonia has positioned itself very strategically in scientific matters and that in the last twenty years efforts have been made to have some of the most pioneering research centres in Europe in different fields, and this has meant that society as a whole has been impregnated with this seed that is beginning to break down barriers. This is translating, for example, into many university degrees that are beginning to mix both traditions.

Has the pandemic helped to bring science closer to society?

The pandemic has confirmed a trend that we were already seeing. For example, with the Science Friction exhibition we were able to give voice to a huge number of artists and creators who have been working for many years inspired by Lynn Margulis or Donna Haraway. In this way, science and technology directly challenge creators and have given a renewed meaning to science fiction. The pandemic has confronted us with a scenario that is hard to believe. It seemed impossible that the world would come to a standstill, that we would stop flying, that we would close ourselves off at home… This, which was a brutal shock from a psychological, economic and social point of view, science fiction had in a way already anticipated it.

So the pandemic has consolidated the growing interest in science, but at the same time science has realised that perhaps it needs the tools of imagination, literature or science fiction, which are part of the cultural sphere.

How do you think the policies for promoting scientific culture adopted by public administrations in recent years have evolved?

The pre-eminence of scientific research in culture has been confirmed, both locally and in Catalonia, with the establishment of research centres that have generated knowledge around them, attracting talent from all over the world. It is evidence that science has permeated the public agenda of our country and our city.

What about culture in general?

We still have a long way to go to understand that culture is not an accessory but a priority instrument. We are a long way from culture being perceived as a priority in public policies and in the corresponding budgets. I think that here, science has taken a bigger step than culture itself, which is still among the last political priorities. We have a long way to go and we are now at a time of great uncertainty, which is compounded by the loss of cultural capital. For example, cultural facilities and institutions have not yet recovered from the financial crisis of 2008.

Where does Barcelona stand on the international cultural scene?

Barcelona has enormous potential to become the cultural and scientific capital of Europe. I think we should consider culture and science as the main flags for Barcelona’s recovery and the transformation of the city’s tourism model.

Last autumn, Barcelona and Madrid were recognised as cultural and scientific capitals of the state. What does this recognition mean for Barcelona?

It is an important recognition of a reality, the cultural and scientific capital status of Barcelona. We hope that it will become a stable and structural support to be able to carry out ambitious projects for the city.

Science and technology evolve so fast that we find it difficult to adapt to their progress. Do centres like the CCCB contribute to this adaptation?

The pandemic has shown us the need to break down the watertight compartments between disciplines. The world is profoundly interrelated and there is no single discipline that helps us to understand the complexity of the world. We need spaces that link knowledge, disciplines, languages and experiences and encourage encounters between diverse worlds and audiences. The answers to the world’s problems will no longer come from a single voice, from a single discipline; they will be choral solutions. Solutions will come from the sum of artistic, literary, cinematographic, scientific, philosophical and anthropological perspectives…

In the future, will we need more CCCBs?

In a world that is becoming increasingly closed, where new frontiers are set and technologies close us in our bubble, we need spaces that open up worlds, generate links, contribute to imagining other possible worlds and reinforce the democratic principles of freedom of expression and pluralism. These spaces are more necessary than ever.