The fund could reach 30 million euros in public-private investment. 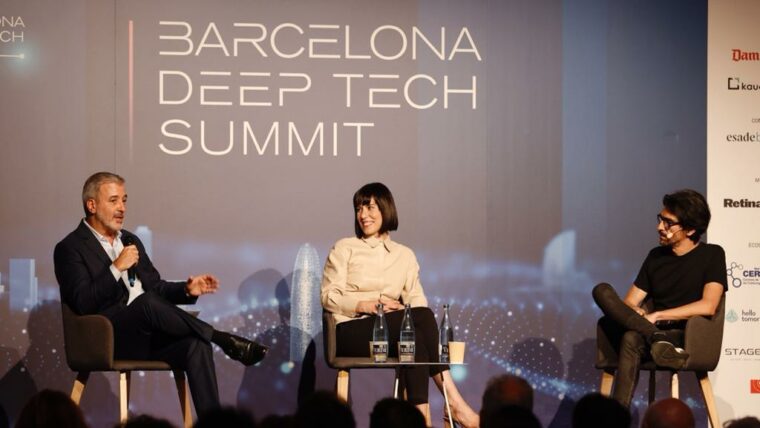 Barcelona City Council will open a new public-private investment fund for deep tech startups, those that come out of universities and research centres and work with high technology to come up with innovative solutions that respond to the present and future challenges of society. The announcement was made on 22 September at the first Barcelona Deep Tech Summit, held in the city, which became a meeting point for the scientific and entrepreneurial community.

As part of the meeting, the first deputy mayor, Jaume Collboni, and the Minister of Science and Innovation, Diana Morant, discussed the situation of technological entrepreneurship in Spain, and the contribution of deep tech startups to global and contemporary challenges.

The first deputy mayor, Jaume Collboni, explained that “companies must be able to carry out business innovation based on science to improve people’s well-being, with an impact on energy efficiency, climate, health, and the fight against diseases, among others. So we want business projects and the talent coming out of our universities to be able to generate these opportunities. In this sense, we have also set up the Barcelona Innovation Coast initiative, which will be the driving force behind new projects in these areas”.

The Minister of Science and Innovation, Diana Morant, declared that “Barcelona is the cultural and scientific co-capital of Spain, the city with the highest scientific production in our country and the eighth in Europe. For this reason, we are committed to the creation of a biomedical research centre in the Ciutadella, which will be a centre of knowledge, and which will work towards innovation and the search for future solutions”.

The impact of these initiatives will represent solutions and greater innovation to solve generalised and minority diseases, advances in rockets, satellites, clean energy, transport, and to take on social challenges, fighting against inequality. As global themes, the different round tables and conferences of the congress have exposed the most disruptive advances in the fields of health, biotechnology, artificial intelligence, blockchain, urban mobility, quantum, New Space, among others.

The event was attended by five hundred national and international participants with around thirty speakers from organisations such as NASA, Meta IA, Nestlé and ABB Robotics, and a representative sample of the talent generated in Barcelona. The different sessions were attended by the rectors of the universities promoting the Barcelona Deep Tech Node: Daniel Crespo Artiaga (UPC), Joan Guàrdia Olmos (UB), Javier Lafuente Sancho (UAB), Oriol Amat (UPF), and the vice-rector Àngels Fitó Bertran (UOC). Also taking part were Lluís Juncà, director general of innovation and entrepreneurship at ACCIÓ, and Fèlix Ortega, director general of Barcelona Activa. The event was opened by the Third Deputy Mayor, Laia Bonet, the Catalan Minister for Business and Employment, Roger Torrent i Ramió, and the Rector of the UPC, Daniel Crespo Artiaga, as a representative of the universities.

The Barcelona Deep Tech Summit is an initiative of Barcelona Activa and Barcelona City Council, together with the public universities UB, UAB, UPC, UPF, UOC, and the co-organisation of ACCIÓ, the agency for business competitiveness of the Department of Business and Labour of the Generalitat de Catalunya. The meeting was sponsored by Damm, AWS, Kaudal and Gohub, with the collaboration of ecosystem partners: CERCA Institution, Tecnio Association, Hellow Tomorrow, Deep Tech Alliance, Stage2, Secpho, Mobile World Capital Barcelona, ESADE BAN, IESE and Retina Prisa Media.