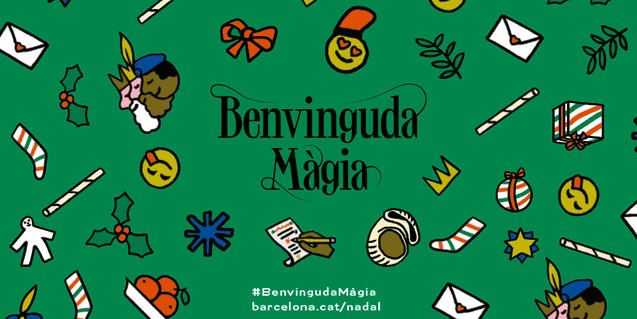 The Christmas lights are being inaugurated on Thursday 28 November, with a music show performed by Dagoll Dagom.

Dagoll Dagom will be inaugurating the Christmas season in Barcelona at Christmas lights switching-on ceremony, which is taking place in Plaça Can Fabra in Sant Andreu on 28 November, starting at 5.45 pm. Under the title “From sadness we will make light”, Dagom Dagoll will be presenting a musical show, with the collaboration of Brodas Bros. it is the tale of a town shrouded in darkness. At the end of the performance, Barcelona's Christmas lights will be switched on.

Between 20 and 31 December, Plaça de Catalunya will be the scene for the staging of “Stardust”, an installation that features six luminous inflatable rabbits. The huge central rabbit will become a stage from 11 am to 6 pm, offering two different shows every 30 minutes: Los Nadalòvitx, a small orchestra performing Christmas carols from around the world, and the multidisciplinary show Qui ve per Nadal? [Who’s coming for Christmas?] During the evening, from 6 pm to 9 pm, the square will turn into a magical place: a forest where people can stroll around and reflect on whether this natural environment is necessary for human life. There will be sound and light effects, to make the forest as magical and life-like as possible for spectators.

As usual, the New Year's Eve celebrations will begin on Avinguda de Maria Cristina. They start at 9.30 pm with music and light shows at Montjuïc’s Magic Fountain. The French company Groupe F will once again be running this visually impressive show, with 125 flame and pyrotechnic generators, a big, 15-metre high cylinder acting as a screen, luminous characters that will pass over the Magic Fountain suspended from zip lines, and an original soundtrack.

The traditional Orfeó Català Christmas concert in Plaça del Rei starts at 7.30 pm on Friday 3 January. It is free and open to everyone.

One of this year's new features is King Balthasar’s royal messengers receiving children’s letters at Barcelona City Hall (Plaça de Sant Jaume ) from 2 to 4 January. Children can also find the royal postman on board the schooner Santa Eulàlia, at Moll de la Fusta wharf, where they will be collecting letters for the Three Kings of the Orient the 27, 28, 29 of December and of the 2 to 4 of January.

With regard to the Three Kings Parade, Their Majesties the Kings of the Orient will be arriving in Barcelona on the afternoon-evening of 5 January, accompanied by their traditional retinue of magical creatures and royal postmen and women. The event starts at 4 pm at Moll de la Fusta. Following the traditional welcome by the Mayor, the Parade will set off round the city-centre streets at 6 pm, arriving at Avinguda de Maria Cristina at 9 pm.

There are over a hundred other large-scale events and activities in Barcelona’s districts during the Christmas festivities. There are a total of 110 events, with 11 in each district. These include storytelling, magic and theatre, tap dancing, circus acts, swing and much more.

You can check out all the Christmas activities in the city at barcelona.cat/nadal.