Monday to Friday at 21 h 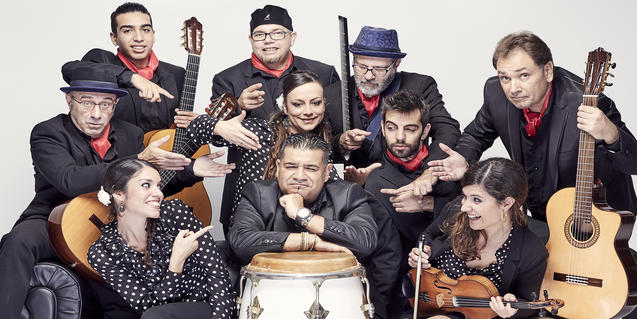 The Barcelona band introduces 'Sabor a Rumba,' a series of concerts with songs by Peret, Gato Pérez, Rumba Tres, and many more.

Summer is here, and Teatre Apolo is celebrating its arrival. Barcelona band Sabor de Gràcia, under the lead of Antonio "Sicus" Carbonell, is introducing Sabor a Rumba, a series of concerts that will take you onto an authentic and generous territory of music and emotions through Rumba Catalana. From 13 July to 14 August, the band will play songs by Peret, Gato Pérez, Rumba Tres, Los Amaya, Las Grecas, Pescaílla, Gipsy Kings, Chacho, and many others. The performances intend to pay tribute to this exemplary community and celebrate Rumba Catalana.

Sabor de Gràcia was founded in 1994 by Antonio Carbonell, a gipsy from Barcelona's Gràcia neighbourhood who is known all over Catalonia as "Sicus." Fast forward more than 20 years and the band is a reference within the Rumba Catalana genre. Some of its albums are Tots els colors (1996), El Mundo Baila (2004), La Cançó amb Rumba (2006), Sabor Pa'Rato (2010), Gitanos Catalans (2014) and the double album Sabor a Peret (Homenatge al Rei de la rumba) (2018). They have played all over the Catalan region, across other parts of Spain, and in Venezuela, Puerto Rico, Argentina, France, England, Hungary, Austria and Germany, among others.

Concerts at the Teatre Apolo will start at 9 pm and tickets range from 20 to 28 euros. You can get them here.