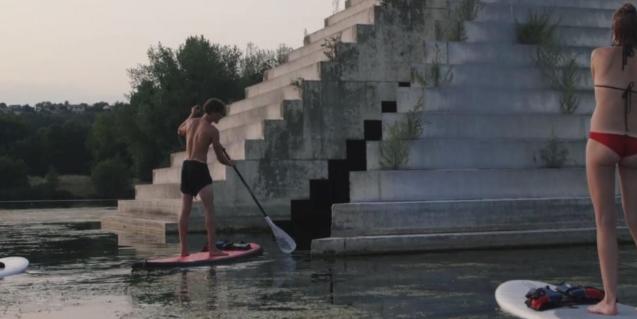 The Filmoteca has selected some movies whose stories take place under the intense summer sun.

Summer is, without a doubt, one of the most cinematic seasons of the year. For this reason, the Filmoteca de Catalunya has prepared a cycle entitled Contes d'estiu, which wants to help us enjoy the season by screening, every Thursday and Sunday in August, some of the best films that take place during this time of the year. In the films, heat is closely linked to each of the stories.

The first title is L'île au trésor (2018). The French director Guillaume Brac brings us closer to the daily activity of a water park in the Paris suburbs in summer. It is a place to be distracted from the world but also to live adventures, discover love and transgression or simply relax. Mainly for children, but also parents.

Aquele Querido Mês de Agosto is Miguel Gomes' second Portuguese feature film. A hybrid between documentary and fiction, it shows a crew filming in a rural setting in the interior of Portugal, where Portuguese emigrants are on holiday, visiting their homeland in summer. The atmosphere is festive, with the occasional meeting and misunderstanding between friends and family.

Sud sanaeha (2002) is a Thai film that depicts a love story between an active factory worker and an illegal immigrant in the Thai jungle.

To close the month, Le rayon vert (1985), a film by French director Éric Rohmer, one of the most important representatives of the so-called nouvelle vague, will be screened. Delphine has just suffered a breakup. The summer holidays begin, and her travelling companion abandons her two weeks before they leave for Greece. She is left without a plan at a time when people in Paris start leaving the city in search of colder places.

Let's enjoy another year of a long and warm August with the cinema at the Filmoteca. Tickets can be purchased through this link.