Historical building of the University of Barcelona 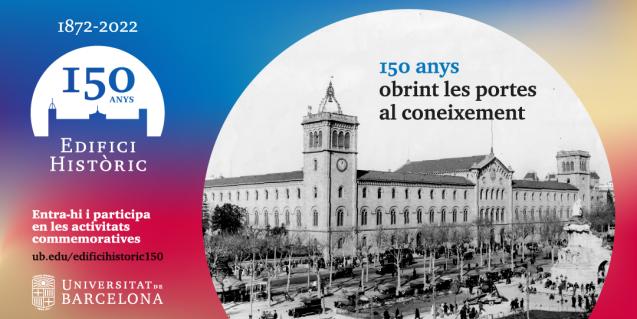 The University of Barcelona commemorates the 150th anniversary of the first academic year in the Historical Building.

In October 1872, the first academic year began in the Historical Building of the University of Barcelona (UB), designed by the architect Elies Rogent i Amat (Antoni Gaudí's teacher). It has therefore been 150 years since it was founded. The UB hasn't overlooked the milestone and has prepared a special year to celebrate the birthday with a variety of activities.

The first event will take place on 3 October, when five scenes dedicated to the history of the building will be shown at the opening ceremony of the 2022-2023 academic year. It will be held in the auditorium, where there will also be a concert on the 20 of the same month by the orchestra and choirs of the UB. It will be entitled 150 years of Catalan music.

On 10 November, the Aula Magna will host the presentation of the first volume of the UB Art Catalogue. And five days later, Doctor Jordi Casassas will give a lecture entitled The Return of the University to Barcelona, 1821-1872.

One of the main events of the commemoration will take place in February next year when the 150th-anniversary exhibition will be inaugurated. To make it possible and to make the celebration as participatory as possible, the UB has launched an open invitation to anyone who wishes to contribute images of life inside the building, photographs that will be part of the exhibition.

On the other hand, also coinciding with this special academic year, the Clock Tower has been restored, which from now on will be open to the public and will be integrated into the route of the regular guided tours of the Historical Building, which will obviously also take place this year.

A little bit of history

Construction of the UB's Historical Building began in 1863, and as early as December 1871, some classes were being held, albeit in very precarious conditions. In fact, the building wasn't completed until 1891. The University had decided to move to the new building due to the dilapidated condition of the old convent of el Carme, where it had been provisionally installed in 1838. The long period of banishment of the University to Cervera, which began in September 1714, was over. The academic year 1872-1873 marked the beginning of regular teaching and research in the Historical Building and the definitive establishment of the University in the city of Barcelona, events to be remembered and commemorated this year.