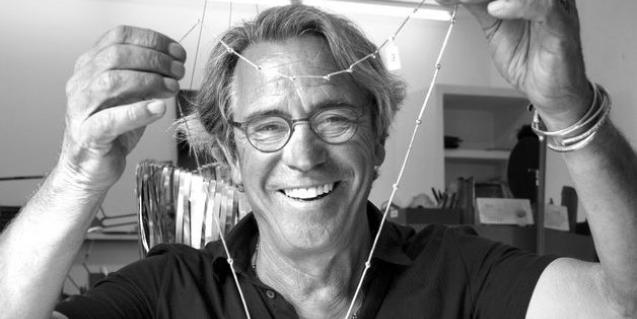 The Museu del Disseny de Barcelona is dedicating an exhibition to this key figure in contemporary Catalan jewellery.

Until 27 November you can visit at the Disseny Hub Barcelona the exhibition Enric Majoral. The expanded jewellery, curated by Maia Creus, author of the book of the same name.

Born in Sabadell in 1949, Majoral is one of the leading names in the contemporary Catalan jewellery scene. Member of the FAD, president of Orfebres FAD from 1992 to 1997 and winner of the National Crafts Prize 2007, Enric Majoral passed on his passion to his son Roc. He started in 1974 in a self-taught way, learning from everything around him: from nature, traditional crafts and archaic forms to the world of art and design.

The jeweller's close relationship with the small island of the Pitiusas has marked his gold and silver creations, which he defines as the "essence of Formentera", full of symbolism and multiple meanings. As a result of this relationship, Majoral was named an adopted son of the island, and in 2019, he received the Ramon Llull prize awarded by the Government of the Balearic Islands.

The exhibition brings together 159 pieces distributed in eight areas that illustrate Majoral's creative stages: Formentera house-workshop (dedicated to discovering its vital origins, inscribed in the cradle of Mediterranean culture and the link with the territory); The talisman Jewel (a section where the magic of the amulet and the austerity of the archaic jewel of Greek, Phoenician and Punic inspiration resonate); The poetry of space (an introspective look at the jeweller and his perceptual experience); Container jewellery (where the pieces are the containers for materials, shells, plants and particles from the marine and coastal landscape); Organic jewellery (on the attraction to the world of water); Sandjewells (pendants, brooches, bracelets and rings created from improvisation and imperfection with the innovative use of polyurethane and silver oxidation processes); Hand, tool, material (an intuitive dialogue to capture matter in movement, with highly expressive and vital finishes and textures); and Naming the jewel (about the process of choosing the names that identify their collectors). The exhibition closes with L'Aiguador (2019-2020), a weightless sculpture that descends from the ceiling like a starry planet.

Coinciding with the exhibition, Espai C (floor -1) at Disseny Hub Barcelona is hosting the 27th edition of Enjoia't, a selection of the 26 most transgressive pieces — 14 in the Professional category and 12 in the Student category — competing for the International Contemporary Jewellery Awards organised by the Association of Artists and Artisans of the FAD (A-FAD).

In addition, on 29 September at 6:30 p.m., there will be a round table discussion on Majoral's professional career with the participation of the architect Elías Torres Tur, the artist Stella Rahola, and the PhD in Art History Àlex Mitrani.