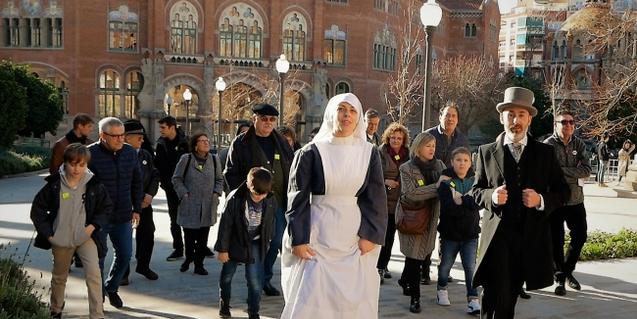 A dramatised tour of the former Sant Pau Hospital led by its architect and a nurse.

More than a hundred years ago, in 1902, construction began on the new Santa Creu i Sant Pau Hospital, a facility planned by the architect Lluís Domènech i Montaner. It was built in response to the healthcare needs of 20th-century society and operated as a hospital until the beginning of this century. To find out about the medicine of those times within the context of society back then, on Saturday 15 February, Sant Pau Recinte Modernista has organised a dramatised tour that will be led by a nurse and Domènech i Montaner himself.

Domènech i Montaner's Sant Pau is one of the iconic buildings of Barcelona modernism, as emblematic as Antoni Gaudí's La Pedrera and Josep Puig i Cadafalch's Casa de les Punxes. However, its construction certainly does not represent the birth of the hospital as an institution. Its origins date back to the creation of Santa Creu de Barcelona Hospital in 1401, when the building in the Raval district that now houses the National Library of Catalonia was constructed. For five centuries it was the only hospital in Barcelona until, at the end of the nineteenth century, the site could no longer meet the healthcare needs of the city's constantly growing population. Also, medicine had progressed and required facilities in accordance with the practice and technical innovations of the time.

So a decision was made to build a new hospital with funding provided by Pau Gil, a banker who, upon his death, bequeathed half of the proceeds from the sale of his business to the construction of a hospital bearing his name (Sant Pau) that could provide treatment for the poor. In accordance with the hygiene customs of the time, the new hospital was moved out of the city centre to its current site. Nowadays, in spite of no longer operating as a hospital, the Sant Pau modernist site is a witness to an innovative past. Find out about the everyday practice of medicine there and how Domènech i Montaner's beautiful building rose to the healthcare challenges of the twentieth century.