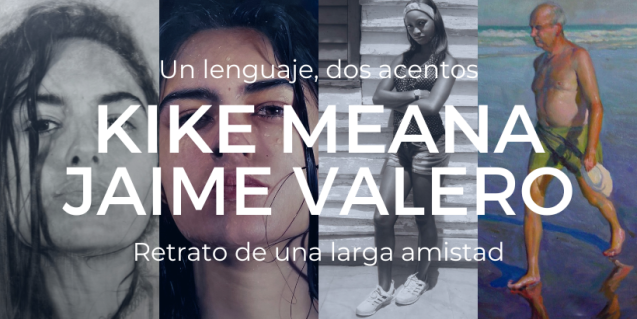 The European Museum of Modern Art (MEAM) is hosting until 11 December the temporary exhibition Un lenguaje, dos acentos. Kike Meana. Jaime Valero. Retrato de una larga amistad, in which several retrospective series are exhibited to broaden the viewer's vision of the different currents of figurative art today. Both are Fine Arts graduates from the Complutense University of Madrid and are world-renowned for their realistic and hyperrealist works.

As Kike Meana says, it is an "eclectic, dynamic and very entertaining" exhibition made up of more than 130 works, including drawings — with charcoal and graffiti — and small and large format oils.

Meana does not hide the omnipresent influence of the "master of masters", Diego Velázquez, of whom he confesses to being a fervent admirer. At the MEAM, you can see the series Automata, Urban Landscape, Portrait, Conventional Landscape, Figure, Metamorphosis, Drawing, Sketches, Slaughterhouse, and Subject & Object. They are works in which a rigorous interest in drawing prevails as the basis, the result of the annotations he takes from nature. His painting has an extraordinary richness of nuances, light and colour, which prompts the sense of being part of that atmosphere: immense panoramas of Havana, London or Madrid.

Next to him is Jaime Valero, who exhibits works from his beginnings, from his stay in the United States and, above all, from the last decade, in which he has focused fundamentally on the face and the body, corresponding to the series El agua entra en escena, La intimidad y el agua, El agua en el retrato - Los grandes formatos, Trabajos más recientes, Hacia la Ruptura, Formato menor, acuarelas y apuntes and Investigación y búsqueda. His work is solid, compact and offers the spectator paintings charged with a paralysing magic thanks to the brushstrokes that dissolve into each other, the extensive colour palette and an inexhaustible range of pictorial resources.

Tickets to the exhibition cost 11 euros and can be purchased in advance at this link.

Coinciding with the exhibition, the MEAM is organising two 24-hour workshops — "Alla Prima" Human Figure Workshop, from 25 to 28 October, and Air and textures in portrait drawing, from 22 to 25 November ± with Meana and Valero, respectively. You can check more information on each of the links.