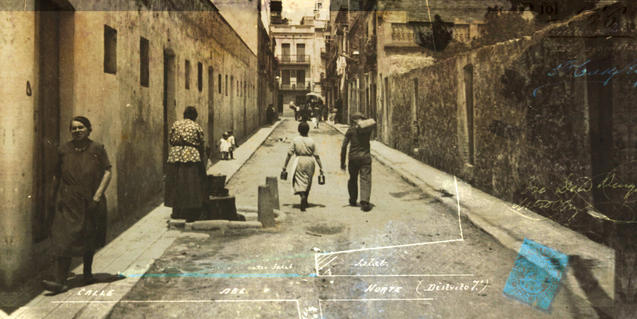 Its author is Alexia Medici and the display is experimented using mobile phones and QR codes.

Two statements from people related to art can help us understand the project of the Fundació Suñol that bears the signature of the artist Alexia Medici. TJ Clark, an art historian and writer, says, "It takes something more than seeing to make things visible," and John Berger, who in addition to being an art critic was a novelist, painter, and poet, left writing in the book Ways of Seeing (1972) that "what we see depends on when we see it and how we see it." In this line, Medici proposes an intangible exhibition, entitled It began with water, which invites the visitor to explore and reflect on the history of various emblematic places in the neighbourhoods of Sants and Les Corts using the subjective perspective as a way of seeing. An initiative, explains the artist, that emerged as a "reaction to confinement and mobility restrictions" in 2020 due to the pandemic, and especially what was called the “Phase 0 of de-escalation”, when it was allowed to go out at certain times and close to home. The author describes the exhibition as "invisible", and that it is necessary to "experiment by navigating through mobile phones and QR codes presented on the site". Each place tells its story and also introduces a work of art produced specifically for the place where it is presented, "thus creating layers of interpretation of historical memory," says Medici.

The starting point of this exhibition route, and hence the title of the exhibition, is the inauguration in 1819 of the water canal known as the "Canal de la Infanta", which carried water from the river Llobregat to Sants, first to be used for agricultural land, but a few decades later this canal was crucial for the industrialisation of the area.

Learn more details of this intangible exhibition on this link.