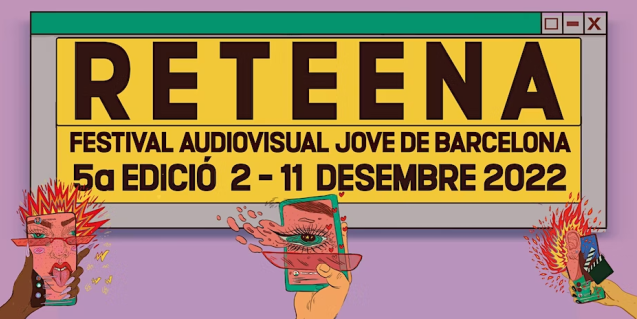 The Reteena Festival, recently awarded with the Ciutat de Barcelona Prize, presents an ambitious programme of screenings, workshops and lectures.

The Reteena, Yound Audivisual Festival of Barcelona, promoted by the cultural association Reteena, was born with the aim of becoming a space for discovery, reflection and experimentation in audiovisuals for young people. It is now in its fiftieth year, after receiving the City of Barcelona Award last February in the category of Audiovisuals and Digital Culture from the Barcelona City Council. The event will be held at the Fabra i Coats (2, 3 and 4 December) and the Filmoteca de Catalunya (8 to 11 December).

The old factory will host round tables, debates, practical workshops, master classes, film screenings and other proposals. The inaugural film of the festival, Tener tiempo, by Mario Alejandro Arias, Gabriela Alonso Martínez and Nicolás Martin Ruiz, will be screened. It is the chronicle of a generation that does not have it easy, but that despite everything struggles, creates and invents new ways of living and living in society. On the same evening of 2 December there will be a session of short films by young talent. On Saturday 3rd, among many other activities, there will be podcast and acting workshops, a "script battle", and several round tables. The films 10 Things I Hate About You, Akira and La amiga de mi amiga will also be screened. And on Sunday 4 December, those who come to the Reteena will be able to learn dubbing, photography or to become a DJ, choose between different masterclasses, or follow the films Moonrise Kingdom and The Craft.

In the second part of the festival, at the Filmoteca, it will be possible to see, among many other films, for the first time in Catalonia, four films directed by women and internationally acclaimed: Aftersun by Charlotte Wells, The Kings of the World by Laura Mora Ortega, The Yellow Ceiling by Isabel Coixet, and Rodeo by Lola Quivoron. A Professional Jury, made up of Charas Vega (author and internet astrologer), Víctor Alonso-Berbel (filmmaker) and Zoe Stein (actress), will be responsible for awarding the prize for the best film in the official section.

The Reteena 2022 poster is the work of the illustrator, visual artist and designer Candela Rivera.

If you want to attend the festival, there is the possibility of buying a season ticket that allows access to all the activities, or a day ticket, with access to the proposals of the chosen date. The practical workshops have very limited places, and advance booking is required through the form that will be sent once the ticket has been purchased.

All the details of the programme, on the official website.