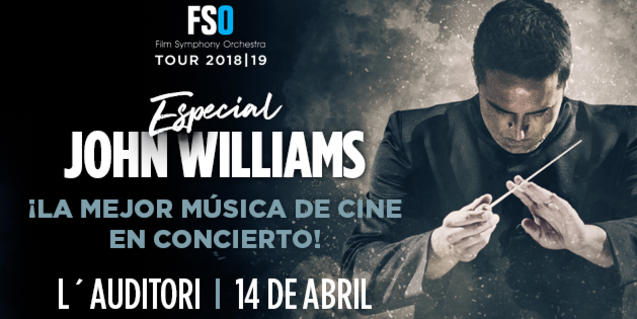 The compositions of the king of soundtracks as you’ve never heard them before, at L’Auditori.

Many people consider John Williams the indisputable king of film soundtracks. Five of his iconic compositions have won Oscars out of a total of 51 nominations. You can no doubt sing some of the melodies dreamt up by this American composer: ‘Jurassic Park’, ‘Harry Potter’, ‘Star Wars’, ‘Jaws’, ‘Hook’, ‘Schindler’s List’ and ‘Superman’, just to name a few of them. Now, the Film Symphony Orchestra, an orchestra that specialises in performing film soundtracks, is coming back to Barcelona to pay Williams a tribute with a concert in our city featuring some of the composer’s most famous tunes. The performance is part of the FSO TOUR 2018/19: John Williams Special tour, which is taking them all over the peninsula with more than 60 concerts. Even though they have already performed this show in Barcelona, they have now totally updated the programme to present even more tunes. In addition to the spectacular light show and details, much of the showmanship comes from the orchestra’s charismatic conductor, Director Constantino Martínez-Orts.

The concert will be on 14 April at 7 pm in the large hall of L’Auditori. The many compositions to be played include the soundtracks of such famous films as ‘Fiddler on the Roof’, ‘The Patriot’, ‘Memoirs of a Geisha’, ‘Munich’, ‘Close Encounters of the Third Kind’, ‘E.T.’, ‘Raiders of the Lost Ark’, ‘Star Wars’ and ‘War Horse’.

Tickets are being sold from €28 to €52. You can buy yours on the L’Auditori website.