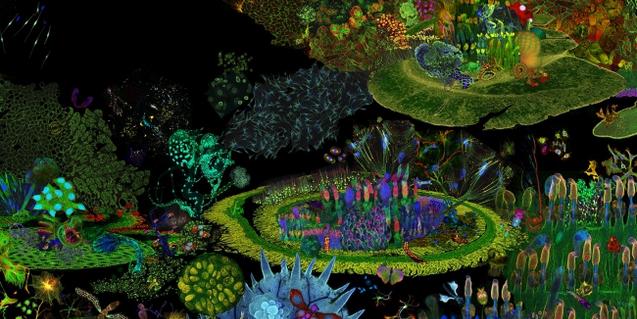 An installation at the Sant Pau Recinte Modernista that combines art, science and new technologies.

More than five centuries ago, in Flanders, the Dutch painter Hieronymus van Aken, better known as Bosch, created one of the masterpieces of the Renaissance, The Garden of Earthly Delights. The famous painting is a triptych full of symbolism that looks at the origin of life, its evolution and death. Now, five hundred years later, scientific knowledge has made us see this process with different eyes and technologies have opened the doors to new forms of artistic expression. At this point, the artist Anna Rierola has reinterpreted The Garden of Earthly Delights in a beautiful installation that can be visited until the 30th of June in the pavilion of La Purísima at the Sant Pau Recinte Modernista.

Anna Rierola is a visual artist with a very strong relationship with science. Her raw material is the images resulting from scientific research, especially in the field of biology and the microscopic world. In fact, Rierola has been the first artist-in-residence at an avant-garde centre in the city, the Institute of Biomedical Research of Barcelona (IRBarcelona), where she has explored the intersections between two fields, science and art, which culturally (and wrongly) we tend to keep at a distance, but which have much in common in terms of their processes and approaches. The result of his residency is the work on display at the Sant Pau Recinte Modernista, organised together with the Quo Artis Foundation and IRBarcelona, with the collaboration of the FECYT.

The garden of delights takes microscopic images that reflect certain aspects of the life cycle of living beings. In Rierola's work, the micrographs illustrate biological activity with a host of aspects and characteristics of cells, such as their diversity of functions, processes such as cell division or cell death, their development and organisation, etc. An incredible universe of hyperconnected elements that at different levels of organisation (cellular, individual, population) build the gigantic and complex network of what we understand as life.

Enjoy Rierola's particular garden and his microscopic vision of nature. More information at this link.