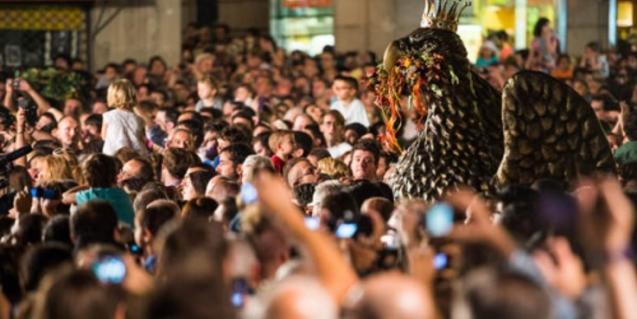 Havana, the capital of Cuba, will bethe guest city at the La Mercè Festival 2020. Between 23 and 27 September 2020, we’ll have the chance to sample some of the Cuban capital’s lively culture along Barcelona’s streets, with different theatre, dance and music shows and film screenings.

This January, a delegation from the Barcelona Institute of Culture will be visiting Havana to forge new institutional ties and start to shape the artistic project for the 2020 Guest City Programme. Barcelona and Havana have had a very strong relationship for decades, which has played a prominent role in shaping the identity of both cities, establishing deep and enriching cultural, social and economic ties that are still strong today.

The aim of the Guest City Programme is to showcase the contemporary artistic scene of a city that shares a common perspective on culture, creativity and art. This joint project is an excellent opportunity for Barcelona to strengthen its bonds with Havana, as well as its links with Cuba’s entire creative sector. Havana, which has just celebrated its 500th anniversary, is a hugely culturally diverse city, not just in its more traditional artistic expressions but also in its Latin urban rhythms. Like Barcelona, one of the cornerstones of the Cuban capital’s international fame has been its cultural production and the city is also making innovation one of its hallmarks. This is why the artistic selection for the Guest City Programme will especially feature some future names in Havana’s culture.

Since 2007, it has been tradition for Barcelona to invite a foreign guest city as part of its La Mercè festivities. The Guest City Programme is designed to showcase the contemporary artistic expression of cities with which Barcelona wishes to preserve or enjoy unique ties of friendship and cooperation. It has a special impact on the festival programme, suffusing it with the cultural profile of its participating guest cities. The cities that have taken part since this initiative began: Medellin (2007), Quito (2008), Istanbul (2009), Dakar (2010), Saint Petersburg (2011), Montreal (2012), Vienna (2013), Stockholm (2014), Buenos Aires (2015), Paris (2016), Reykjavik (2020), Lisbon (2018), Beirut (2019) and Havana (2020).

Cooperation with the city of Havana

Barcelona's relations with Havana go back to 1993, just after the so-called “Special Period” in Cuba following the dismemberment of the former Soviet Union. At that time, the two cities twinned, embarking on a relationship which remains strong today with the Cuban capital consistently considered as a priority city for our city’s international cooperation plan.

Barcelona City Council and Havana's National Assembly of People's Power, which have been twinned since 1993, first established cooperative relations in response to their mutual interest in launching projects that would enable the exchange of management knowledge and experience in architectural heritage conservation and renovation. This led to Barcelona signing an agreement in 2005 with the OHCH (Office of the Historian of Havana), run by Eusebio Leal, to comprehensively renovate a block on Calle Barcelona, and to include the creation of a Barcelona-Havana Space to operate as a meeting point between our cultures.

Since then Barcelona has been working with the OHCH as a priority partner in Havana. The two institutions signed a Memorandum of Understanding in 2013, which was renewed in 2018. These agreements consolidate the two cities’ cooperative relationship focused on technical work and knowledge transfer between those in charge of managing public policies in different areas.

You can find further information on cooperation with Havana in thislink.