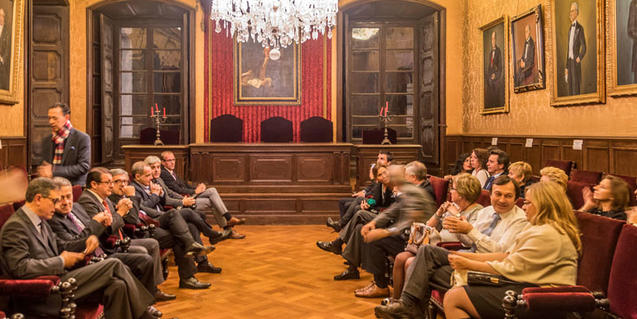 You can get to know the inside of the building, located on Carrer del Carme, every Wednesday and Saturday both day and evening.

Starting on 10 July, the Royal Academy of Medicine of Catalonia, located at number 47, Carrer del Carme, is hosting a series of guided tours during the day (Wednesdays and Saturdays) and evening (Saturdays), which will cover more than 500 years of the institution’s history.

The Academy is headquartered in city premises comprised of the building that used to house the Hospital de la Santa Creu, along with the Casa Convalescència and the former building of the Col·legi de Cirurgia. The Academy has been the core at the heart of Barcelona’s health history for more than 500 years, from the early 15th century until well into the 20th century, and it is associated with famous names in Catalan medicine.

The building, which was designed by the architect Ventura Rodriguez, is one of the most important examples of neoclassical architecture in Barcelona. What particularly stands out is its anatomy amphitheatre, which was used to train surgeons. The professors who taught here include Pere Virgili, the prominent educational reformer in the 18th century; Antoni de Gimbernat, an anatomist who earned prestige around Europe in his day; and Santiago Ramon y Cajal, a professor in Barcelona from 1887 to 1892 who conducted his basic studies on the doctrine of the neuron here.

The day visits, which are available on Wednesdays and Saturdays at 10:30 am, 11:30 am and 12:30 pm, cost eight euros and should be reserved by phoning 933 210 125 or at the email address reservas@sternalia.com. The evening tours on Saturdays, which cost twenty euros for adults and ten for children, begin at 8 pm and include a glass of sparkling wine and a performance by a mentalist.