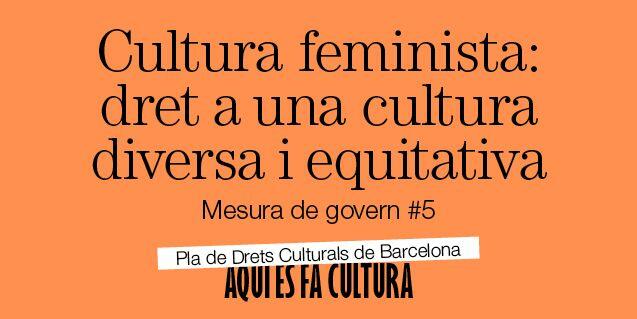 The right to a diverse and equitable culture will govern the cultural policies of the City Council in all its phases: creation, programming and access.

The Deputy Mayor for Social Rights, Global Justice, Feminism and LGTBI, Laura Pérez, and the Barcelona City Council delegate for Cultural Rights, Daniel Granados, have presented a new measure within the Cultural Rights Plan focused on the relationship between cultural policies and gender perspective in all phases and agents of creation, programming and access to culture.

The measure is called Feminist culture: The right to diverse and equitable culture, and it corresponds to the fifth of the nine axes in which the Cultural Rights Plan is structured. The document is an ambitious and pioneering strategy that will be worked on progressively to strengthen democratic life and incorporate the cultural fabric and all the municipal areas in the design and implementation of local cultural policies.

Feminist culture: The right to diverse and equitable culture is a compilation of projects and lines of action that seek to approach a diverse, fair and equitable culture from a feminist perspective. The goal is to move towards intersectionality, to ensure equal access, representation and decision-making, to reflect on gender stereotypes, to combat the vertical and horizontal segregation that exists in the cultural sphere, and to highlight the cultural production and historical memory of women and all people who don't conform to the androcentric and heterosexual norm.

The measure takes as its starting point the regulatory framework in the field of gender; it makes a diagnosis of past and present; it points out the objectives to be assumed, detailing the actions and tools needed from the Institut de Cultura de Barcelona (ICUB) to carry them out. The measure is accompanied by a budget of 190,000 euros to implement the first actions and the corresponding monitoring calendar.

Below, you can see in detail the main lines of work that will be incorporated into the public policy developed by the ICUB, as well as all the projects and bodies in which it participates:

- To ensure a balanced presence of women and men in decision-making positions.

- To deepen the analysis of cultural reality by applying the gender perspective.

- To move towards gender-parity in cultural programming.

- To avoid sexist and androcentric gender stereotypes in programming and communication.

- To promote spaces for reflection on how to apply the feminist perspective in cultural policies and action in the city.

- To apply an intersectional perspective to take into account other axes of inequality (class, origin, race, sexual orientation, gender identity and disability) in addition to gender.

Some highlights amongst the line of creation are:

- To create a protocol on harassment on grounds of sexual orientation, gender identity and gender expression in cultural activity.

- To promote gender perspective in grants.

- To promote a new study on the gender perspective in municipal cultural programming.

- To study a system of price bonuses for cultural activities with a gender perspective.

- To incorporate a gender perspective in the design and restoration of cultural facilities and public procurement.