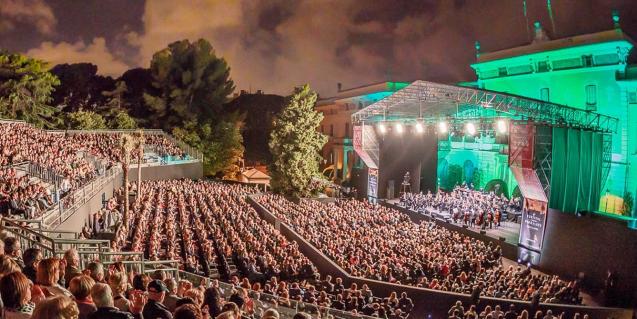 From 7 June to 24 July, Barcelona will host a new edition of the Jardins Pedralbes Festival. The event, which is supported by the City Council, has become a reference throughout Europe for the bucolic setting in which it is held — the Palau Reial, the work of Eusebi Bona and Francesc Nebot, and the gardens designed by Nicolau Maria Rubió i Tudurí — and for the cast of artists who, each year, parade through its open-air auditorium, with seating capacity for 2,000 people.

The Ibiza-based English singer-songwriter James Blunt will open the festival with the presentation of his album The Stars Beneath My Feet (2004-2021), which brings together the achievements of a stellar 17-year career, along with four new songs: Love under pressure, Unstoppable, Adrenaline and I Came for love.

From the international scene, you will find Simply Red (on 8 June, as part of their Blue Eyed Soul tour); Jethro Tull (led by the indefatigable Ian Anderson, on the 12th); the multifaceted Andrés Calamaro (on the 15th, to review the achievements of Dios los cría); "the godmoder of punk", Patti Smith (on the 16th); the composer, producer and author of Le Freak, Nile Rofgers & CHIC (on the 21st); Madness, the kings of ska (on the 22nd); Tom Jones, "the Welsh Tiger" (on the 25th); the trio A-ha (on a world tour to commemorate the 35th anniversary of the release of the album Hunting High And Low, on the 26th); LP, Laura Pergolizzi's alter ego (on the 28th); The Beach Boys, the Californian surf idols (on the 29th); and the Uruguayan singer-songwriter Jorge Drexler, who will appear with a new album, Tinta y tiempo, under his arm (on the 30th).

In July, it will be the turn of the Australians Crowded House (on the 2nd); Il Divo, in a performance in which David Miller, Sebastien Izambard and Urs Buhler will pay tribute to Carlos Marín, with baritone Steven LaBrie as a guest (on the 3rd); the indomitable Joss Stone, who will present the album Never forget my love (on the 4th); Alan Parsons (who will do a double bill on the 6th and 7th); the Mexican Marco Antonio Solís (on the 8th); the Danish Agnes Obel, the author of Myopia (on the 9th); the Canadian Paul Anka, reborn after his appearence on The Masked Singer (on the 12th); jazz master John Benson (on the 13th); Juanes, the global ambassador of Latin rock (on the 14th); soundtrack composer Yann Tiersen (on the 16th); Kool & the Gang, the wizards of the dancefloor (on the 19th); the soulful voice of Jessie J (on the 20th); Gilberto Gil, one of the fathers of Brazilian popular music (on the 21st); musician and activist Ben Harper & The Innocent Criminals (who will present their first instrumental album, Winter is for lovers, on the 22nd); jazz singer Diana Krall (on the 23rd); and Crystal Fighters, the most party-loving Londoners (on the 24th).

The Catalan participation includes Blaumut, who will introduce Olímpica i Primavera on 10 June; Els Amics de les Arts, at what will be their only concert of the summer, on 17 June; and Loquillo, who will perform his latest work, Diario de una tregua, on 15 July. Flamenco and Spanish song, meanwhile, will be represented by Rosario, who will present the LP Te lo digo todo y no te digo na (on 9 June); Diego el Cigala, with a tribute to Mexican music (on 14 June); the evergreen Raphael (on 18 June), and Pablo Alborán in a double format: solo, with piano and guitar, and accompanied, in concert (on 5 July).

Ticket prices range from 20 to 208 euros, depending on the artist and the chosen venue. You can find the full programme and the links to purchase tickets online here.