Exhibition included in the museum ticket. 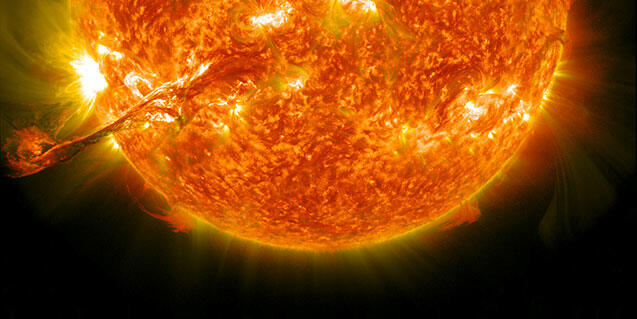 The Sun is the focus of a temporary exhibition at CosmoCaixa, co-organised with the Science Museum in London.

Since the very first origins of humanity, our species has admired the sun as a source of light, heat, life and inspiration. Revered as a deity and used to count the passage of time, the star has been the object of study since the most ancient civilisations. Now, the CosmoCaixa reveals all the secrets that science has allowed us to discover about our star, and the intimate relationship we have maintained with it. It does so from 22 March to 16 October with the exhibition The Sun. Living with our star, organised jointly with the Science Museum in London.

After touring museums in the United Kingdom and other countries around the world, the exhibition lands in Barcelona with a collection of more than a hundred objects that bear witness to our relationship with the Sun throughout history, from when it was conceived as a star that revolved around the Earth (then considered the centre of the Universe) to being one of the billions of stars in any given galaxy. In the exhibition, this relationship is presented in four thematic areas: the measurement of time, the use of its energy, its relationship with health, and the Sun as an element of study in astrophysics.

A 16th century sphere representing the movement of the stars around the Earth, an Islamic astrolabe, solar energy collectors and prototypes of nuclear reactors are some examples of the objects that can be seen in the exhibition. A set of instruments that tell a long story in the search for answers. From when we worshipped the sun as a god, through the different observation devices used to study it, until we have learned how to convert its radiation into clean and sustainable energy. In fact, the exhibition also makes us look to the future, with the advances to reproduce the nuclear fusion that keeps the star alive and that is proposed as a source of clean and inexhaustible energy. Besides, it takes us on a journey to the solar surface through a spectacular immersive installation with real images of the sun.