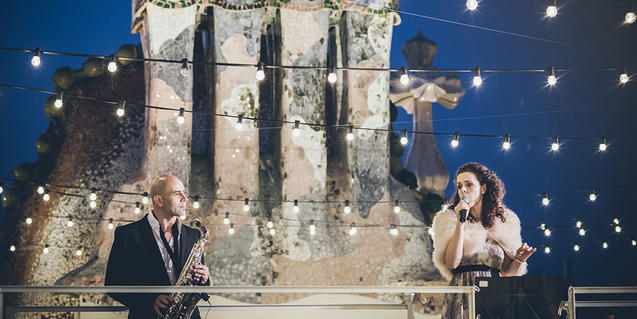 The night-time concert series on the terrace designed by Gaudí is continuing through August with more artists from different styles of music.

From 3 June, the terrace at Casa Batlló has filled the nights with music under the stars with the Magic Nights concert series. These concerts will continue throughout August so residents and visitors alike can enjoy the summer nights, avoiding the hottest hours of the day. In addition to the concerts, the experience also includes a tour of Casa Batlló with an augmented-reality guide and a drink to enjoy while listening to the music until well into the night.

In August, you’ll get the chance to listen to a wide variety of styles, every night from 9 pm. The tour of Casa Batlló starts one hour earlier, at 8 pm. For example, on 20 August the Summer Lovers will take the stage with their jazz stylings to make you boogie. On Saturday 24 August, it will be Wom & Strings, featuring a violin, viola and cello, playing everything from classical music to today’s hits. On 29 August, it’s time for the best rock and roll with Al Sánchez & The Speedway Runners, an Elvis Presley tribute band that has played all over the world. Another tribute band, the Scarbeats, will be playing on 31 August, this time honouring the legendary British band The Beatles. In addition to these groups, there are many others that will surely be a pleasant surprise.

There are three types of tickets to Magic Nights, ranging from €39 to €49, depending on the extras you want to include. You can get yours and check out the full programme on the Casa Batlló website.