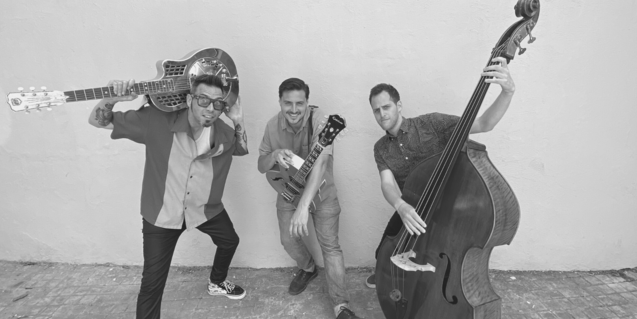 Tickets include access to the museum before or after each performance.

From July 30, the Museu Europeu d'Art Modern (MEAM) will be offering, every Friday evening, a live music performance. It is the Friday Blues cycle, a musical journey through blues, bluegrass, swing and jazz.

The first day will feature The Blue Hot Jellies, a trio of Argentinian descent but based in Barcelona, composed by Chino Swingslide (guitar and vocals), Martín Burguez (electric guitar) and Hernán Fridman (double bass). The band plays and experiments with the first half of the 20th-century blues.

On August 6, Sedgwick & Shingles, with James Sedgwick (harmonica and vocals) and Brian O'Mahoney (guitar and vocals), traditional blues and old-time music — also known as roots music — will take over. The duo will present their latest album, which alternates introspective songs like Winter Seed with more upbeat and carefree ones like Beer for Breakfast.

Sofie Dee & August Tharrats will land on August 13. The young and portentous Flemish singer will arrive directly from Belgium, where she has gained popularity after participating in successful musicals and ensembles such as the North Side Big Band, in addition to directing the UBAN Choir of Antwerp. She will perform next to August Tharrats, considered the pioneer of blues piano in Catalonia.

Johnny Big Stone & The Blues Workers will have their turn on August 20. The trio, formed by Johnny Big Stone (guitar and vocals), Little Jordi (double bass) and Reginald Vilardell (drums), will have a special guest: saxophonist Artem Zhulyev. Together, they will squeeze out all the juice from genres such as west coast, jump blues or traditional blues. And all thanks to their varied repertoire and their positive vibes with one another, which is apparent in their four albums: Jumpin & Dodgin (2013), Move On (2015), Juke Joint Sessions Vol.1. (2016) and Juke Joint Session Vol.2 (2017).

The Blues Prisoners will bring August to a close – but not the cycle, which will continue until September. The duo, consisting of Sergio Giunta (guitar and vocals) and Lluís Souto (harmonica), will present themselves as the alter egos of two inmates who escaped from the Joliet prison in Illinois in 1938 – all while taking advantage of the confusion caused by the crowd dancing frantically to Jailhouse Rock by The Blues Brothers.

The initiative offers the chance to enjoy the MEAM's contemporary figurative art, as people attending the concerts will be able to visit the permanent exhibition before and after the shows. However, it should be noted that closing time is at 8 pm, and performances will be an hour and a quarter long, while the visit lasts around 45 minutes.

Seating is limited to 40 people, so buying tickets in advance through this link is advised. They can also be purchased directly at the box office at least 30 minutes before any show. Access to the hall will be from 5.30 pm to 5.55 pm, and once concerts have started, entry won't be possible.