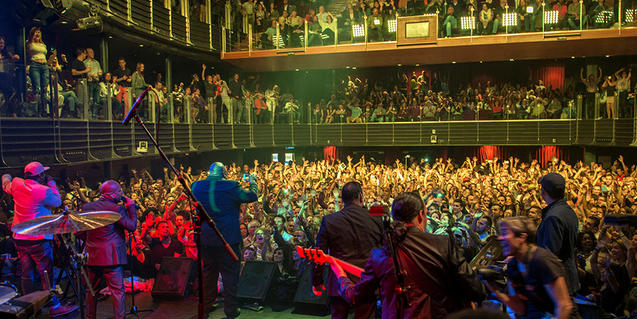 The best national and international artists will be coming to our city for the 51st  annual festival.

The Barcelona Jazz Festival is a European benchmark in black music. It has such a good reputation that, since the first festival in 1966, it has attracted the best jazz musicians in the world. Plus, it has helped create a solid Catalan scene, which is highly regarded internationally. As proof, this year's Portrait of an Artist section is dedicated to the renowned Andrea Motis. It will feature 5 concerts of different sorts, with a total of 4,000 tickets so no one has to miss it. Other big names that are coming this year include Herbie Hancock, Djvan, Wynton Marsalis & The Jazz at Lincoln Center Orchestra and pianist and composer Ludovico Einaudi. The list goes on, with more than 70 concerts in this year's festival: Richard Bona, Ron Carter, Angélique Kidjo, Martirio & Chano Domínguez, John Scofield, Makaya McCraven, Joe Lovano and many more. Plus, the DeCajón! flamenco series continues to consolidate its position within the festival, with performances by Tomatito, José Mercè, Rafael Riqueni, Las Migas, Los Farrucos, Dúo del Mar and Estrella Morente.

The Barcelona Jazz Festival will be held from 21 October to 20 December, although there will be two performances in February 2020, too. The concerts will be held at a variety of venues, including Barts, Luz de Gas, Harlem Jazz Club, L’Auditori, Palau de la Música Catalana and Teatre Tívoli, among others.

Tickets cost different prices, depending on the performer and the venue. You can get single or season tickets on the The Project website.