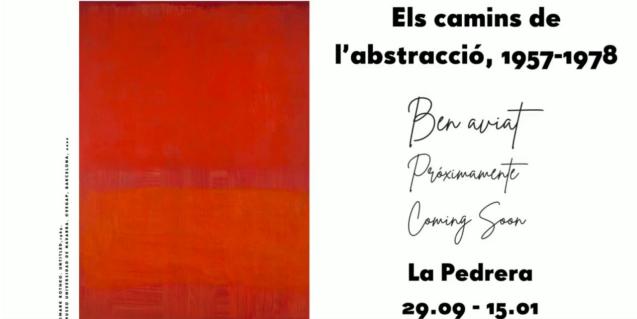 La Pedrera is hosting a selection of 70 paintings from the second half of the 20th century from the museum in Cuenca.

Until 15 January, you can visit The paths of abstraction, 1957-1978. Dialogues with the Museo de Arte Abstracto Español in Cuenca – an exhibition organised by the Catalunya La Pedrera Foundation and the Fundación Juan March and curated by Manuel Fontán del Junco, Sergi Plans and Marga Viza.

As the name suggests, the exhibition is based on the collections of the Museo de Arte Abstracto de Cuenca, created in 1966 by the painter and collector Fernando Zóbel, and highlights the meaning behind an institution that Alfred H. Barr, founder and first director of MoMA, described as "the most beautiful little museum in the world".

La Pedrera brings together around 70 works that illustrate the variety and complexity of the different forms that abstraction took during the second half of the 20th century, as well as the main national and international trends, such as European informalism and American abstract expressionism, geometric abstraction, optical-kinetic art and colour field painting.

They all belong to a generation which revolutionised art and opened up new paths for abstraction by questioning the form and matter of painting, expanding the pictorial space and using new pigments mixed with other materials and on other supports that marked a new relationship between the artist and reality.

Tickets to the exhibition cost nine euros and can be purchased in advance at this link.

The exhibition will be accompanied by a series of complementary activities, including workshops, lectures and various collaborations with the Fundació Tàpies, the ESMUC, the Gran Teatre del Liceu and the Filmoteca de Catalunya. You can see the programme at this link.