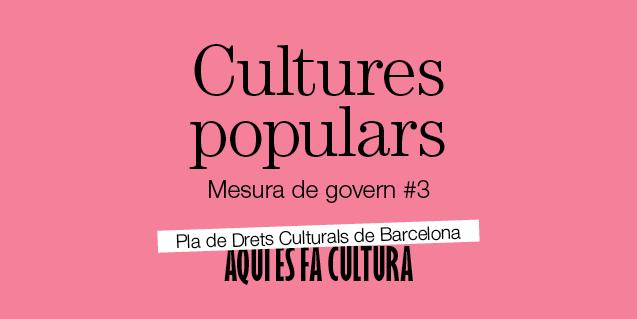 Among the 18 proposed actions, we can find a boost to the Cases de la Festa and the creation of a new festive calendar for the city.

To recognise the role of popular cultures as spaces of social cohesion in the city, to strengthen and consolidate the right to popular and traditional cultural practices, and to incorporate new vectors that promote diversity, interculturality, citizen participation and innovation – these are the main goals of the Barcelona City Council's government measure "Popular culture: the right to popular and traditional practices as activities for participation and social cohesion", which is part of the Barcelona Cultural Rights Plan.

The measure highlights the need to recognise the diversity of popular cultures present in the city of Barcelona. It also highlights the integrating and facilitating function of the coexistence of popular and traditional cultural practices and aims to protect its expression in the public space in a more festive and participatory way, safeguarding the strong grassroots associative dynamism spread throughout the city's neighbourhoods.

Among the 18 actions proposed within the measure, some support the whole network of entities organised around popular and traditional cultural practices, such as a new impulse in the Cases de la Festa or studying how to improve the management of the spaces available for these practices. There is also the creation of a new festivity calendar in the city, which fosters the visibility of all the traditional events and celebrations in Barcelona, regardless of their cultural, community or religious origin. Another action is the setting up of the working group on Events in the public space, with special emphasis on popular cultural activities on the street. Similarly, actions designed to enrich the right to cultural practice and expression by promoting exchange, co-creation and innovation through the promotion of collaborative and neighbourhood spaces will also be promoted.