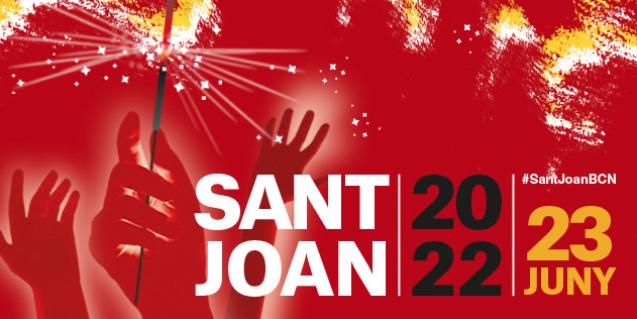 The city fills with popular festivities after the arrival of the Flama del Canigó and the burning of bonfires.

The Night of Sant Joan coincides with the summer solstice. For this reason, it is the shortest and most magical night of the year. It is one of the most deeply-rooted popular festivals in the Catalan Countries and begins everywhere with the reception of the Flama del Canigó, which lights the purifying fire. Community dinners are held around it, with cava and coca (with fried pork, pine nuts or candied fruit), enlivened with concerts, dances, firecrackers, fire castles and correfocs.

In Barcelona, enjoying this tradition is possible thanks to many neighbourhood associations and popular culture organisations that work hand in hand.

After two years of events being adapted to the Plaça del Rei, on Thursday, 23 June, the traditional ceremonial arrival of the Flama in the city will return. The fire from Catalunya Nord will leave the Camp Nou at 5 p.m. and enter the Plaça Sant Jaume at 5:45 p.m. to the sound of the song Muntanyes del Canigó, performed by the Cobla Sant Jordi - Ciutat de Barcelona.

At 6 p.m., the Castellers de Barcelona will raise a pillar in its honour, and the Àliga, the Capgrossos Macers, and the Gegants de la Ciutat will also dedicate their dances to the Flama.

At 6:15 p.m., there will be a reading of this year's Message of the Flama, written by Eliseu Climent. For the Valencian publisher, "we are language and fire; an incombustible group of people who forge their own future step by step, stubbornly".

Next, they will distribute the Flama to the different delegations of each neighbourhood and entity, and with their own part of the Flama, they will light all the bonfires of the city. The events programme on that day will be very extensive. It will include children's lantern workshops, bell ringing, havaneres, DJs, parades, correfocs, costume dinners, popular open-air dances and musical performances. You can check all the activities at this link.