From Thursday to Sunday, from 8 pm to midnight 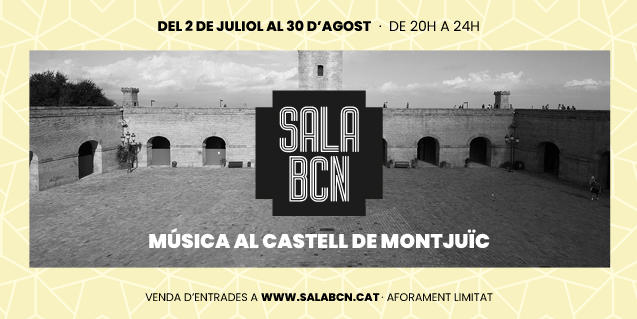 A careful programme with more than 60 outdoor performances, adapted to security measures, to boost the sector and recover the cultural pulse.

The Institut de Cultura de Barcelona and the Associació de Sales de Concerts de Catalunya (ASACC) have presented the Sala Barcelona project  which will mean that, from July 2nd to August 30th, live musical activity in the city will restart. The initiative is part of the second measures package to support the cultural sphere, promoted by the City Council in light of the crisis caused by the sanitary alert.

Barcelona's concert halls closed in March, and current restrictions mean that many do not consider it viable to reopen until they can operate at 100% capacity. Presently, ASACC is made up of 73 rooms throughout Catalonia, 42 of which are in Barcelona, and 27 have a capacity smaller than 250 people. Sala Barcelona addresses these performance spaces, especially the smallest ones, but also the sector as a whole: the goal is to take concert halls out into the open air, with an activity adapted to the sanitary measures.

Thus, Sala Barcelona will allow citizens to, once again, attend live concerts safely, and will contribute financially to help small venues that are in a critical situation, will help to relaunch the activity and employment of the live music sector, it will culturally energize the city and, ultimately, it will promote the cultural sphere, one of the most affected by this situation.

Quality programming in the Montjuïc Castle

The chosen environment is the Montjuïc Castle Parade Ground, a fresh space with views, which will allow adaptation to preventive measures as well as to hold concerts limited to 400 seated spectators. The price of the tickets will go from 12 to 15 euros, facilitating the maximum accessibility of the public to this event.

Sala Barcelona will have a poster with more than 60 performances, as eclectic as the city's concert halls, prepared by many of its programmers. The concerts will be held from Thursday to Sunday between 8:00 p.m. and midnight and, to this day, the programme for the month of July has already been closed:

And these musical performances have already been confirmed for the month of August:

Over the next few weeks, new details of Sala Barcelona will be announced on this website.