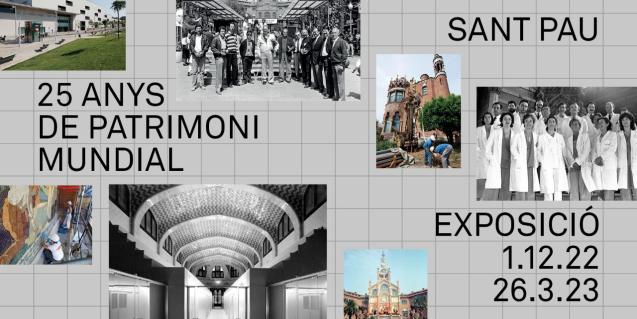 The Sant Pau Art Nouveau Site commemorates the 25th anniversary of its declaration as a World Heritage Site with a photographic exhibition.

The exhibition commemorating the 25th anniversary of its declaration as a World Heritage Site by the United Nations Educational, Scientific and Cultural Organisation (UNESCO) in recognition of its "exceptional universal value" and the contribution of new architectural, typological and artistic solutions can be visited until 26 March in the Hipóstila Hall of the Administration Pavilion of the Sant Pau Art Nouveau Site.

Admission to the exhibition is included in the price of the visit (free, with audio guide or guided), which ranges from 11.2 to 20 euros and can be purchased in advance by clicking aquí. The exhibition is entitled 25 years as a World Heritage Site and displays photographs of the first restoration and recovery works of the Hospital, which testify to the awakening of awareness of its uniqueness since the late 1970s.

The Santa Creu i Sant Pau complex was built in two phases: the first, designed by Lluís Domènech i Muntaner between 1902 and 1913, comprising thirteen buildings (of a total of 48 pavilions initially planned); and the second, directed by his son Pere Domènech i Roura from 1920 onwards, which includes six buildings as well as other later constructions.

The UNESCO agreement took place on 4 December 1997 in Naples and also extended this recognition to another work by Domènech i Muntaner: the Palau de la Música Catalana. To commemorate this event, the two monumental spaces have joined forces to offer a combined ticket that can be purchased for a special price of 24 euros through this link. With this ticket you can visit the two emblematic works of Lluís Domènech i Montaner throughout 2023, coinciding with the centenary of his death.