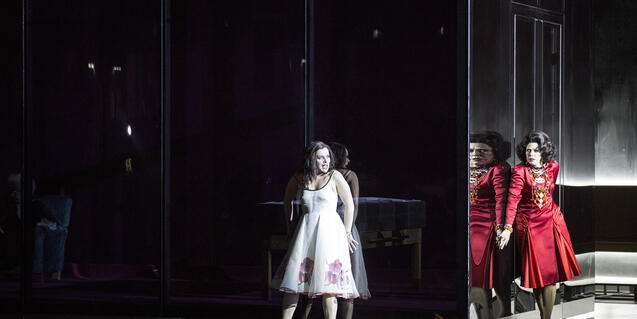 The Verdi Cinemas are offering, on the big screen, the most prestigious operatic productions from the main stages of Europe in V.O. with subtitles.

The Verdi Cinemas, in collaboration with Ibercamera and the Institut de Cultura de Barcelona (ICUB), have announced the Matins d'Òpera programme for the first quarter of 2022. Until March, they will offer 11 different shows – each performed twice a week: one on Sunday and one on Wednesday, both days at 11.30 a.m.

Elektra, by Richard Strauss from the Salzburg Festival, will launch the cycle (9 and 12 January), followed by Giuseppe Verdi's La Traviata from the Rome Opera (16 and 19 January), Wolfgang Amadeus Mozart's Die Zauberflöte from the Bregenz Festival (23 and 26 January), and Verdi's I due Foscari from La Scala in Milan (30 January and 2 February).

In 2020, the Salzburg Festival celebrated its centenary with a new production of Elektra, one of the most famous works by the two founders of the festival: Strauss and Hugo von Hofmannsthal. Elektra knows that her father, King Agamemnon, was murdered by her mother Clytemnestra with the help of her lover Aegisthus. Since then, Elektra has been hunting for revenge, waiting for the day when her brother Orestes returns to kill her father's executioners.

Krzysztof Warlikowski's staging delves into the psychological effects of matricide and highlights aspects such as the obsession and physical degradation of its protagonists, all while Franz Welser-Möst conducts the Vienna Philarmonic Orchestra. The Lithuanian soprano Aušriné Stundyté portrays a vengeful and traumatised Elektra, who suffers a frenzied death. The cast is completed with Tanja Ariane Baumgartner as Clytemnestra, Derek Welton as Orestes, Michael Laurenz as Aegisthus and, most notably, Asmik Grigorian as Chrysothemis.

Tickets are 8 euros and can be bought either at the box office or soon through this link.