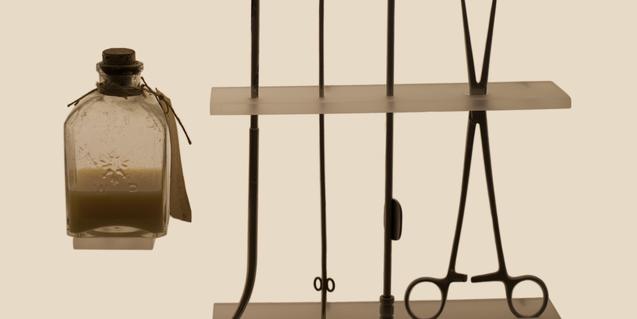 Foto Colectania is hosting this multidisciplinary artist's exhibition on the theme of abortion.

A History of Misogyny - Chapter One: On Abortion, and the repercussions of lack of access is an exhibition by the artist Laia Abril. It will be on display at Fundació Foto Colectania from 28 March, when it will be officially opened from 7 to 8 pm, to 9 June. The exhibition is only the first chapter in a long-term project on the theme of misogyny. In this first installment, April documents and conceptualises the dangers and the damage that women around the world face due to a lack of access to safe, legal and free abortion.

Through her photographs, which include images ranging from portraits to pictures of medical instruments, she depicts over 50 stories, with the images accompanied by texts, such as interviews, as well as audio and video installations. As Abril herself points out, "Abortion is such a visceral issue that I decided to shoot with black and white so that my work was hard without obvious images". The director of Foto Colectania, Pepe Font de Mora, claims that this is not an exhibition in the classical sense, but rather an "installation project", and highlights the fact that, “It is the first time that we have hosted a monographic exhibition by a young artist from our country”.

Laia Abril was born in Barcelona in 1986 and is a multidisciplinary artist who works with photography, text, video and sound. In 2016, she presented On Abortion at Les Rencontres d'Arles, winningthe Prix de la Photo Madame Figaro-Arles and the Fotopress Fellowship. In November 2018 the photobook On Abortion (published by Dewi Lewis) won the Best Book Award Aperture-Paris Photo and has been nominated for the Deutsche Börse Award, which will be decided on 16 May.

Additional information is available at the following link.