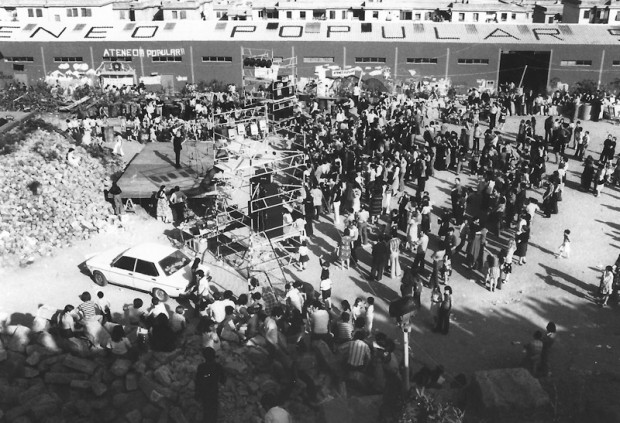 In July 1977, a few months after local residents demolished the asphalt plant, an exhibition was organised on the same site, entitled the “30 Hours”, with cultural events, entertainment and the involvement of social and political organisations. Its purpose was to demand that the space be used as a self-run public cultural association.
Photo: Kim Manresa / Arxiu Històric de Roquetes-Nou Barris

Towards the end of 1976, Barcelona City Council built a cement factory on land designated as woodland for the purposes of urban planning between the neighbourhoods of Trinitat Nova and Roquetes. The cement was to be used in the construction of nearby motorways.

At the request of the Nou Barris Neighbourhood Association (AVNB), the College of Engineers (CI) issued a report that pointed out that these types of facilities should be built at least two kilometres away from residential areas. This one wasn’t. The residents of Trinitat Nova could see how their clothes were shrivelling up when hung outside, after coming into contact with dust from the asphalt plant. The same poisonous dust they were breathing in. Thus began a fight to safeguard their health to the rallying cry of “Let’s save our lungs!”.

The goal to shut down the asphalt plant was coupled with a demand for the space to be converted into a neighbourhood athenaeum, or arts and sciences association. Several neighbourhoods in Barcelona were demanding them. The residents created the Pro-Athenaeum Organising Committee (CPA) to that end. 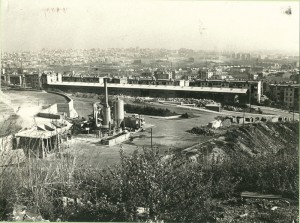 The asphalt plant built by the Council in 1976 on land listed as woodland, very close to homes. The asphalt produced was used in the construction of nearby motorways.
Photo: Kim Manresa / Arxiu Històric de Roquetes-Nou Barris 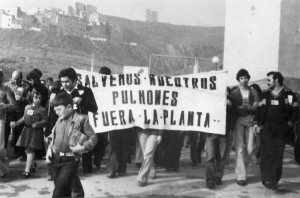 A demonstration by residents against the plant, because of the pollution it produced.
Photo: Kim Manresa / Arxiu Històric de Roquetes-Nou Barris

On 2 October 1976, Josep Maria Socias Humbert was appointed mayor of Barcelona. Among his duties was the “pacification” of a city that was dealing with a number of neighbourhood disputes. And the elections were approaching.

The mayor nominated a series of delegates to take over from the dictatorship’s councillors. In a meeting with the Organising Committee, the delegate responsible for Public Works committed to closing the asphalt plant. Later, at a meeting held on 29 October, Socias Humbert contradicted him, announcing instead that the plant would remain open and filters would be installed to reduce the impact of the smoke and the noise.

This provoked widespread outrage and, on Sunday 9 January 1977, at a meeting that cold and sunny morning, the decision was made to demolish the asphalt plant. A group of residents who were equipped with the necessary materials – which included ropes and large hammers – got “down to work” and knocked the plant down. Before so doing, they had locked the security guard in his office and cut off the telephone line.

The hours passed and they were surprised that the police did not intervene. Later they found out that the police were occupied in containing a demonstration at the Benjamín school, in the same neighbourhood, which was calling for improvements for the centre.

The press reported what had happened. I recall that the journalist Rafael Pradas, who would later become a democratic councillor, described the residents as “metropolitan Indians” and criticised them for having destroyed municipal property worth five million pesetas.

The mayor wanted an easy life. He didn’t file a complaint against the individuals involved in the direct action, and they were never investigated. He didn’t demand any liability from the Nou Barris Neighbourhood Association and he tolerated their use of certain facilities.

The Pro-Athenaeum Organising Committee, formed by the cultural committees within the Trinitat Nova, Prosperitat and Roquetes associations, the Roquetes Social Centre and various residents acting in an individual capacity, would meet every Sunday.

On 4 and 5 July, they held a “30 hours” event: a showcase of music, circus, theatre, poetry, debates, exhibitions and numerous stalls run by social and political entities. Thousands of people attended. The slaughtering of a pig by resident Pep Salsetes is a lasting memory from the event. 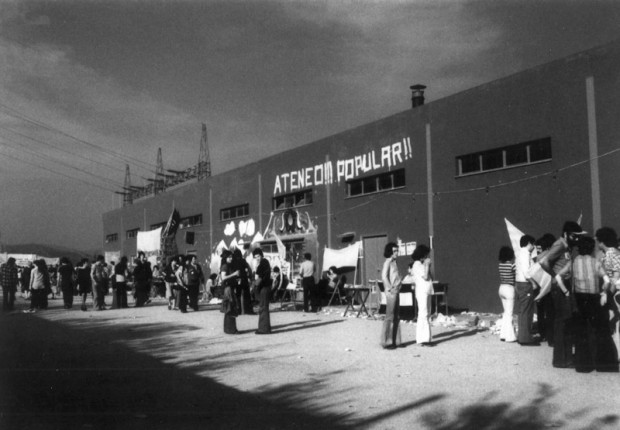 The “30 hours” protest event of 1977, a few months after a group of local residents demolished the facilities of the asphalt plant.
Photo: Kim Manresa / Arxiu Històric de Roquetes-Nou Barris

One of Nou Barris’ biggest battles had begun. The asphalt plant needed to be turned into a self-managed neighbourhood athenaeum.

In 1978, Socias Humbert met with the Coordinating Committee, which unveiled an enormous plaster model of the athenaeum and its surroundings in Plaça de Sant Jaume. The model had been created by the residents with help from various architects. They transported it in a van and carried it on their shoulders through the main door. Socias Humbert gave them the go-ahead.

Tug of war with the City Council

The first democratic municipal elections took place a year later. Jordi Vallverdú, a socialist and former neighbourhood association leader, was elected councillor for civic participation but didn’t carry through the neighbourhood’s demands. In 1980 he announced with much fanfare that: “The Nou Barris Civic Centre (CCNB) will open this year.” It didn’t happen. It would only be inaugurated 14 years later, not as a remote-controlled civic centre but as a self-managed Nou Barris Athenaeum.

The conflicts with the local administration didn’t prevent small activities from being carried out. It was the 1980s. The economic crisis was hitting the neighbourhoods hard, and drug traffickers were pushing heroin on our streets. Some residents, including the activists Juanillo and Álvaro, held small workshops in juggling and stilt-walking to keep the young people occupied. Thus began the circus training that the Athenaeum offers to this day.

In the eighties, the neighbourhood associations were not only taking up the fight for better neighbourhoods. The Pro-Athenaeum Organising Committee was aware that they were situated in the poor and abandoned area of Collserola, criss-crossed with dozens of high voltage towers. For that reason, it decided to launch public camps, where they came up with demands for the mountain and its surroundings to be protected (some of their demands have still to be met). Those years were not restricted to fighting for street paving and equipment. Women members also came together to fight for their rights.

It was understood that “creating neighbourhoods” also involved promoting cultural activities. They reinstated the carnivals, banned under the Franco regime, and invented new festivals, such as “La cultura va de festa” (Culture goes partying). The “festes majors”, neighbourhood street parties, started to appear and casals (self-managed social and cultural centres) were opened, such as the one in Prosperitat.

These were intense years during which networks were strengthened, and coordinating councils and unit committees were created to protest against fascist aggressions and support national strike action, prosecuted conscientious objectors and the campaign against Spain’s entry into NATO.

These events were not unrelated to the Athenaeum, which took part as one more entity. It did something fundamental: it established that culture should entertain but also explain why things are as they are, discuss them and foster the necessary responses. That the residents should play a leading role. Year after year, culture took on a bigger dimension. Culture had to be linked to the territory. The Athenaeum needed to be managed by the residents.

The name is important

The City Council continued stubbornly with its efforts to open a civic centre attached to the municipal government and with a public official as director.

In 1984, a new division of the city was approved and they called our neighbourhood Zona Nord. The neighbourhoods decided to claim the name of the neighbourhood association that had led the fight, and called for a new name for the district: Nou Barris. The Athenaeum adopted the name too. It didn’t want to be a space in no man’s land. Zona Nord was a name that silenced the history of neighbourhood struggle.

In the face of many failures, the Pro-Athenaeum Organising Committee convened numerous protests outside the local administration: sit-ins, paintings, demonstrations. The sheer number of entities that participated and the permanent street presence were fundamental to the resistance.

In 1989 the Nou Barris Bidó was set up as a management body, so named in memory of the barrels, or bidones, that were piled up in the destroyed asphalt plant. It was a step forward. It was clearer than ever that they were fighting for social and cultural facilities and that they wanted to schedule much bigger acts. And so it was. The slogan “Action, struggle and fun” started to become a reality. To this day, the Bidó forms part of the Coordinating Committee of the Nou Barris Entities’ and Residents’ Associations (CAVENB). That is no accident.

In the early nineties, renovation works began. What should have taken a year to complete took four. So as not to be forgotten, a mobile athenaeum was launched, taking its activities to sites and facilities in the neighbourhoods.

On 6 November 1994, to the cry of “It’s done!”, the renovated Athenaeum was officially opened. It had taken more than six thousand days of struggle. Without a shadow of a doubt, the perseverance of a group of activists and the support of the social fabric had made it all possible.

In the years that followed, the struggle continued with a new objective: that its neighbourhood-based management be recognised. That it should not be forced to sign agreements that were based on State contract law. We faced so many challenges. We were non-profit organisations, with roots in the locality. It was a long fight carried out jointly with the self-managed facilities of Nou Barris and of the city. Civic management was finally approved just a couple of years ago. 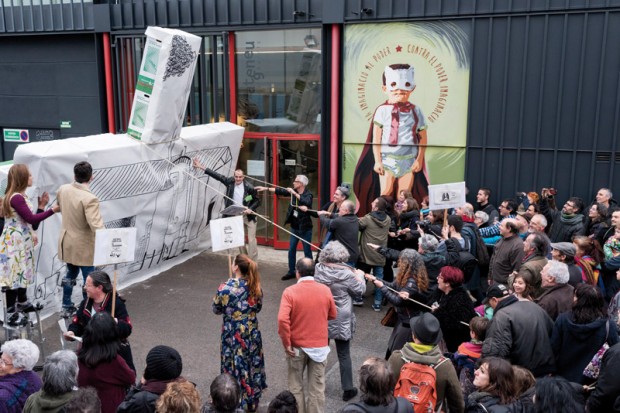 A commemoration of the event at the Ateneu de Nou Barris, 11 February 2017, with the symbolic demolition of a cardboard model of the plant.
Photo: Dani Codina

On 11 February 2017, hundreds of residents came together to celebrate the fortieth anniversary of the Athenaeum. Part of the celebrations included the symbolic demolition of a cardboard asphalt plant. Hugs and gestures of complicity were generously doled out. The act had a deep meaning. That very first goal was still alive: we want to make culture our own. Forty years of cultural programming had been decided with total autonomy. An Athenaeum independent of institutions and political parties that is self-managed. An Athenaeum critical of those in power. An Athenaeum that forms an undeniable part of the city’s cultural map.

For many more years to come, may there be action, struggle and fun!