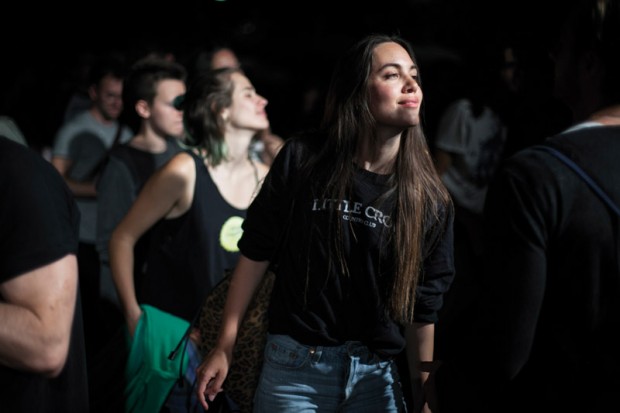 Male chauvinism is one of the main impediments to the full enjoyment of street festivals and to peaceful coexistence.
Photo: Arianna Giménez

In 2015, a number of organisations and groups in the Poble-sec neighbourhood decided to tackle one of the major impediments to the full and free enjoyment of street festivals and to peaceful coexistence: male chauvinism.

It is a complex phenomenon that we are confronting: whenever we try to define gender-based violence it is often difficult to establish clear boundaries between physical, psychological and sexual violence. For example, we know that avoiding certain places or situations for fear of being physically or sexually assaulted is a consequence of gender-based violence because it has led to restrictions on the freedom of movement of women, lesbians and transsexual persons.

We must not lose sight of the fact that the ultimate aim of the various types of gender-based violence is to show who has the power and, therefore, who occupies a privileged position in our society. This phenomenon not only establishes the hierarchical order of personal relationships, but also of the public space, the economy and the political landscape.

Faced with the reality of a culture of rape, we are advocating more of a culture of feelings; that is, a culture that takes into account interactions with the other on the basis of fair treatment and freedom of choice. Moreover, we know that consent has to be explicit and freely given and should always be associated with certain practices, situations and persons.

Gender-based violence is not the product of casual, individual and intimate situations; it is the result of a patriarchal society. For that reason, the necessary response cannot be carried out in isolation but must be part of an organised and collective approach.

The document we initially referred to as the “protocol” was intended to respond to this situation by creating a street festival culture free of male chauvinism. What emerged was an initiative involving different organisations in Poble-sec with a view to collectively deciding what the festivals should look like. For two years, we have organised ourselves under the umbrella of the Poble Sec Feminista collective with a view to building that vision and extending it throughout the entire neighbourhood.

In 2016, our initiative was awarded Barcelona City Council’s Award for Combating Gender-based Violence, which commemorates the International Day for the Elimination of Violence against Women, observed on 25 November every year.

The project, which was publicised in the opening speeches at the 2016 street festivals, managed to get eight local organisations involved, thanks to awareness-raising activities on the need to tackle male chauvinism collectively. Since then, we have created a central festival forum with all the organisations affiliated to the protocol.

Having started with the street festivals as a space for the community to come together, our aim is to extend the initiative to cover all the neighbourhood’s recreational spaces, both open-air and indoor, as well as our everyday lives in the public space.

The twofold objective we are working towards relates to the individual and the collective dimensions of gender-based violence in recreational spaces. Firstly, we are addressing the collective dimension from the cultural perspective and, therefore, from the idea of the festivals themselves. The aim is to monitor and work towards feminist street festivals, and that means promoting a cultural paradigm shift with regard to the content of festivals as well as the human relationships that take place there, the messages that are broadcast, the availability of the space, the types of scheduled activities, and taking into account different ages, backgrounds and so on. 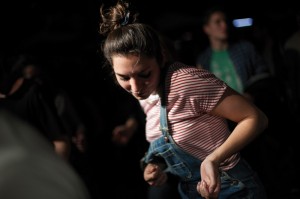 Avoiding certain places or situations for fear of being assaulted is a restriction on freedom that is also a consequence of gender-based violence.
Photo: Arianna Giménez

Secondly, we are working on the individual experience of the festival and, in that sense, we have set ourselves the cross-cutting objective of empowering people to combat gender-based violence. The idea is to ensure that festivals become a place of safety and trust where, if an incident of gender-based violence occurs, the persons affected have the confidence to deal with it themselves or report the offence at nearby support stands. Preventive measures include lectures to raise awareness about what constitutes gender-based violence and how to identify situations of violence, with an emphasis on the concepts of boundaries and consent.

Two years after the launch of this project to promote the gender perspective at street festivals, we thought it was time to review the procedure. So we have now rewritten the Guidelines for feminist festivals framework document, and the updated version was presented at the end of May 2017.