Co-founder and director of the Associació Jiwar Creació i Societat 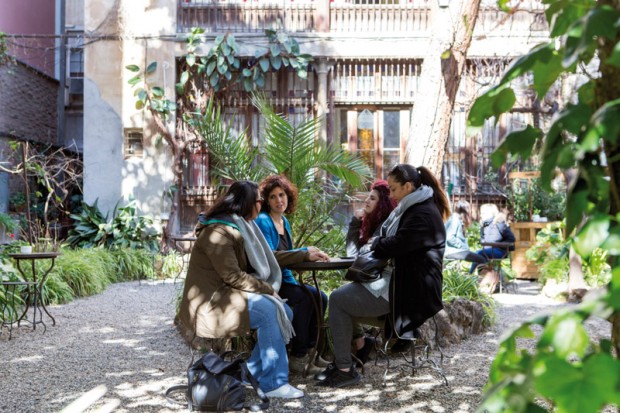 A working session in the Jiwar garden with artists from the Xabaca project.
Photo: César Cid / Jiwar

When, on a May day in 2014, New York poet Sharon Dolin, just out of curiosity, picked up a book from Jiwar’s library called Six Catalan Poets and was deeply touched by the poems of Gemma Gorga, it was the start of a collaboration between the two poets, previously unknown to each other, which gave rise to the English translation of the Book of Minutes collection of poems that went on to win the American PEN/Heim prize for translation in 2016. This didn’t happen in any literary fair, university, poetry reading or institutional meeting; it happened at an artists’ residence and creative incubator which for the last five years has been working to forge connections between artists from around the world and the host city, Barcelona.

Jiwar means “neighbourhood” in Arabic; it’s the driving force, the very essence of a project that vindicates artistic creativity as a tool for change, for rethinking the city and as a new way of interacting in it. Artists from very different cultures have spent time here working on projects that to a large extent would not have been possible without a dialogue with the people that make up this city: recollections from the neighbourhood’s oldest residents for work on a novel set in 1937 (Fernando Grajeda, Guatemala, 2013), the personal stories of refugee artists in the city for an exhibition (Esther Belvis Pons, Barcelona, 2015), sharing the most emblematic everyday spaces and letting yourself be photographed there (Andrei Farcasanu, Romania, 2013), revealing the communal and individual experiences that take place in the city’s kitchen gardens (Wil Weldon, USA, 2014) and the intimate and politically incorrect testimony of all kinds of mothers (Deema Shahin, Jordan, 2015), etc. The list of formats, explorations, research and collaborations is rich and diverse.

Although Jiwar positions itself as an organisation staunchly fighting for an open, intercultural city, it is maybe the “Making Neighbourhood” project that best exemplifies the approach of “sharing the city”, a term often used by the philosopher and thinker Marina Garcés. The project was born in 2013 during the first year of a partnership with the Africa Centre in South Africa, through which Jiwar (and other creative venues and artists’ residences around the world) annually host an artist-in-residence from any country in Africa, from any discipline, following an international selection process. 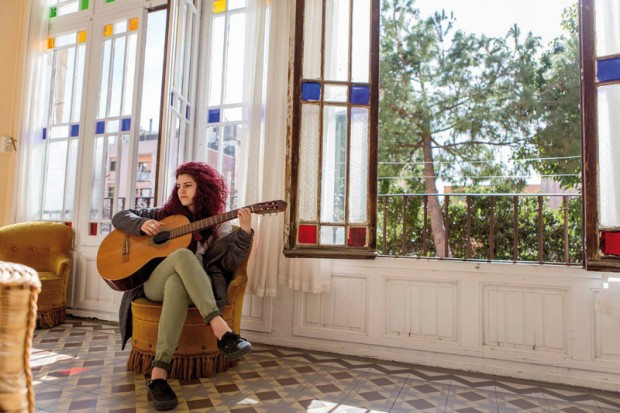 In that first year of collaboration with the Africa Centre, the selected artist was the South African anthropologist and photographer Sydelle Willow Smith, who presented the “Making Neighbourhood” project. This project revolved around a participative photography project with people from different African countries now living in Barcelona, each of them with their own very different personal story, legal situation and daily life. The participants offered views of their city, using single use cameras provided by Sydelle. She, in turn, followed up on these people and created a video, Vecinos (Neighbours), which set out to capture the African diversity and the life experiences of its protagonists in a social context very different from their home countries. It revealed situations of great hardship and uncertainty, but also positive experiences that did not fit the clichés.

Sydelle’s project triggered a strong response and with her permission Jiwar borrowed its title to give name to an annual call for art projects based on the central theme of neighbourhood values as a research topic. Since then, and thanks to the support of Barcelona Interculturalitat, “Making Neighbourhood” has been an exploration of the different ways of being and living in a city. It’s an exploration of neighbourhood as a special and necessary space that is only made possible by the interaction of equals. That’s why we say that it not only changes the artists that lead the projects but also the people who take part in them, because it lets them recount their own experiences from unusual and unique perspectives and this forces us to reflect critically and creatively on the complex reality of sharing a city.

This is not the place for describing all the projects that have been developed over the years, but it is worth emphasizing what it is that makes them happen: the dialogue with the human and social fabric. For example, the artist and curator Thomas Strickland (Canada, 2013 edition), creator of “Transitions”, worked with the LGBT diaspora in Barcelona, people who have had to flee their home countries because of their sexuality, whether they are officially recognised as refugees or not. Strickland used a participative process to build a relationship of trust through a series of meetings and walks around their city. He offered them some guidance on how to tell their stories: a letter to the home country, a letter to the host city and a photograph of the person’s hand in a symbolic place. This project would not have been possible without the support of the ACATHI association for migrant LGBT rights, and its absolute and heartfelt commitment to it.

Likewise, the wide range of women who took part in the “Home is Where Mom is” project by Deema Shahin (Jordan, 2014 edition) was a result of the diverse doors we knocked on that invited us in with such generosity, for instance the PAH (Mortgage Victims Platform) and the day centre for the elderly in Gràcia. It is this wealth of profiles and origins of our artists and the diversity of work, synergies and people that give meaning and enrich not just “Making Neighbourhood”, but the entire Jiwar project as a space for experimentation and exchange.

And what do the artists themselves take away from it? As well as the experience, which is fundamental, the creative material can be used to suit their own interests and project. We are keenly aware of the duty we have to break away from a stereotypical view of the city and to give an opportunity to writers, musicians, visual artists, film-makers, etc., to explore and interact with this other Barcelona, the one whose heart beats concealed under layers and layers of gaudy make-up. Thanks to them, we have also gained a glimpse of some painful cracks that we knew little of. So let’s stand up for this local/global dialogue as a way of living in and of seeing the city in which we live. Interaction is, after all, is good cure for prejudice. 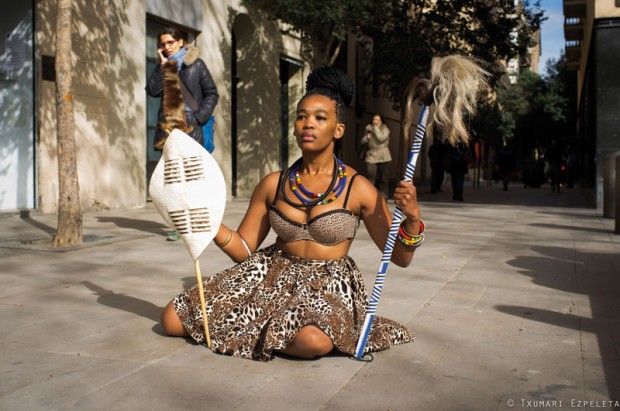 During the course of these five and a half years, 154 artists from 43 different countries have passed through Jiwar. It has been a really positive experience, with only a very few difficult moments which it has always been possible to resolve. The diversity of backgrounds is also due to our aim of hosting as many artists as possible with a non-Western outlook and to offer opportunities to people from countries with less generous cultural policies or fewer resources, such as Turkey, Egypt, Iraq, Peru, Iran, Chile, Mexico, Palestine, Georgia, Lebanon, Sudan, Ethiopia or Uganda. Our own geographical situation means that we have a particularly strong interest in artists from both the northern and southern shores of the Mediterranean and the Middle East, indisputably historic and cultural neighbours subjected to a biased media spotlight that does not to justice to the complexity of their realities, eclipsing their human and particularly their artistic talents.

With this in mind, the Xabaca project, developed together with the International Institute for Nonviolent Action, Novact, and the Al Fanar Foundation for Arab Knowledge, has begun an interesting line of work hosting five female artists-in-residence from Arab countries, part of a project against censorship and creative self-censorship in various contexts.

The experience of supporting the Afghan performer Kubra Khademi during her first months in exile, the collaborations with the Catalan PEN club’s programme to host persecuted writers, and the launch of a project with the New York Institute of International Education’s Artist Protection Fund have all opened up an area of work in which we hold a strong belief: hosting and supporting persecuted artists. Once again, the international agenda holds sway and it’s just not possible for us to work in our own space without seeing ourselves reflected in the terrible mirror of today’s world. For our part, we will continue to take small steps to make Jiwar a space of light, a creative sanctuary that is open and attentive to the worldand our surroundings. 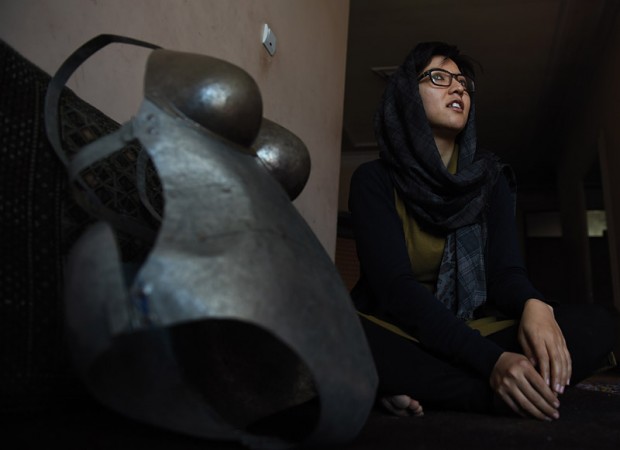 Kubra Khademi with the iron breastplate that she wore for a walk through the centre of Kabul on 26 February 2015 to denounce the treatment of women.
Photo: Shah Marai / AFP / Getty Images

From Kabul to Barcelona

In March 2015 we offered residency to the Afghan journalist Mariam Mana on her first stay outside Asia. It was an exciting and very enriching experience. Mariam arrived with all that comes with being a woman today in Afghanistan and with the recent terrible experience of sheltering, incognito and under death threats, her artist friend Kubra Khademi, who had carried out a performance walking through the centre of Kabul wearing an iron cuirass shaped like a woman’s torso and buttocks, to demand a place in the public space without abuse or impunity. Her walk only lasted eight minutes. The harassment was so intense that Kubra was forced to flee by literally jumping in a taxi that took her to Mariam’s house on the outskirts of the city. She continued to receive death threats. From there, she moved on to other hiding places and, following the public lynching in Kabul city centre of a young woman called Farkhunda, the French embassy rushed through a tourist visa to help her flee the country.

Kubra arrived in Paris without any contacts in Europe. An informal network of residency spaces and independent projects brought her to Catalonia: first to L’Empordà and the village of Les Escaules for its La Muga Caula Festival of Action Poetry and Performance Art, then to the Nau Côclea arts centre in Camallera, Girona, and finally to Jiwar. This initial experience allowed us to build up a network of contacts that we are strengthening with a view to setting up a permanent programme for hosting persecuted artists, along the lines of other such projects around the world.