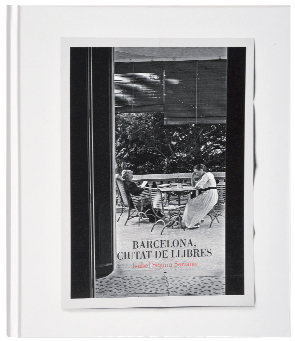 A good book on books. This book thus weaves a stimulating tale about how we have surrounded ourselves with these encapsulated records of memory, and about the role they have played in the city in private and public libraries, publishers, bookshops, mobile libraries, library banks (before the war, on Passeig de Sant Joan), reading campaigns and new social advances that emphasised an educated city where high culture was within reach of the majority.

The literary kaleidoscope of Barcelona comes packaged in good quality paper, shining out from writing on both sides. As historian Isabel Segura Soriano explains in her latest monograph, Barcelona, ciutat de llibres (Barcelona, city of books), by the time of the 1888 Barcelona Universal Exposition the publishing industry was already the city’s second most important area of trade, just behind the still hegemonic textile industry. But the city has grown up with books. At the end of the day, texts are textiles: they weave realities. For over a century now, the Catalan capital has experienced small revolutions, with books as the raw material and even as the basis for urban development and architectural designs that have arisen in parallel with cultural and social changes.

From the end of the 19th century and throughout the 20th century,Barcelona perceived itself as a community that buys and reads books. Just looking at the wonderful photos in this volume people are either sitting with a book, filling libraries and bookshops and generally doing what the records show that Barcelonians were doing: reading to educate themselves, something that was particularly prevalent among skilled workers and the working class. Books have also shown up where people gather outside: at fairs and second-hand markets, but also in unique spaces such as at the old Sant Antoni market or, at the end of the Franco regime, at bars-cum-bookshops such as El Cristal. They even went out looking for readers on mobile libraries, most notably during the Second Spanish Republic, the Civil War, the Franco dictatorship and, of course, during the post-Franco Transition to democracy. It is clear that the city values the printed word. And while the Barcelona of the early 20th century, during the years of the Commonwealth of Catalonia or the Republic, promoted reading, books were later censored and burned during the Civil War and post-war period. Isabel Segura’s tale is full of stories of all kinds, linked to buildings, cultural policies, changes in mentality and life: it is a pleasure to read. It is comforting to find the Barcelona of her text, because a city with books is a city that’s freer. The photographs that illustrate the monograph bear testament to this, with snapshots taken from the best archives and taken by some of the great photographers: Gabriel Casas, Josep Brangulí, Frederic Ballell and Antoni Arissa, before the war; the Pérez de Rozas family, before, during and after; and Francesc Català-Roca, Colita and Pilar Aymerich, after the war, to name but a few.

Barcelona, ciutat de llibres thus weaves a stimulating tale about how we have surrounded ourselves with these encapsulated records of memory, and about the role they have played in the city in private and public libraries, publishers, bookshops, mobile libraries, library banks (before the war, on Passeig de Sant Joan), reading campaigns and new social advances that emphasised an educated city where high culture was within reach of the majority. Women are also key protagonists, including in many of the photos (girls reading, young women readers, librarians), images from a century in which women have fully integrated themselves into society, thanks also to their status as readers and to the acquisition of freedom through education.

The author knows Barcelona well, as previous works have already proven, and she knows the history of women and social movements even better. The academically peripheral view that allows her to provide new material to fundamental questions is welcome. A good book on books.