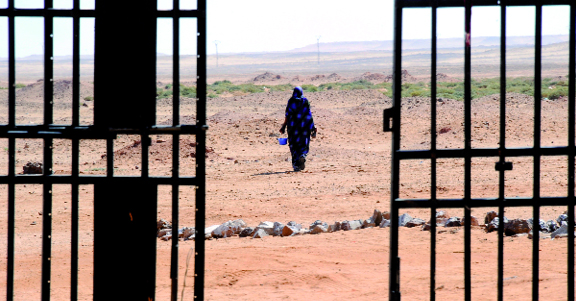 A Saharan woman walks through the desert beyond the gates of the refugee camp “27 February”, in Tindouf, Algeria, in a photo taken in March 2011.
Photo: Dominique Faget / AFP / Getty Images

On 16 March 1978, Aldo Moro, former prime minister of Italy and leader of the Christian Democracy party, was kidnapped on his way to parliament by the Red Brigades, a terrorist group espousing a Marxist-Leninist ideology. Six months later, his lifeless body was dumped on Via Caetani, between the offices of his party and the Italian Communist Party. At the time, Loretta Napoleoni (Rome, 1955) was 25 years old and not yet aware of the impact this event would have on her own life. “A childhood friend of mine was a member of the Red Brigades and she was arrested in 1978 after the kidnapping. During the 35 years she was in prison, I remained in contact with her”, she told me in October, just before she took part in the “D.O. Europa” lecture series at El Born Cultural and Memorial Center. In those days, debates about democracy and armed struggle were quite usual among student circles in Rome.

Napoleoni decided to pursue a career in economics and, after studying at Sapienza University in Rome, the London School of Economics and Johns Hopkins University in Washington, she worked at several European and U.S. banks. But, although more than a decade had passed, two questions were nagging in her head, demanding answers: “Why had my friend become a terrorist? Why did the Brigades, who recruited from among their friends and families, never come looking for me?” And in 1992, when this Italian group declared an end to armed hostilities, she decided to change career and research the world of terrorism.

Now one of the world’s leading experts in the philosophy and financing of terrorism, Napoleoni says that she has found answers to those two questions. First, her friend believed that Italy’s democracy was being obstructed; second, the Brigades considered her too independent to join their ranks. Terrorists, both then and now, need submissive people. But she has arrived at a deeper, more tragic conclusion: “The basic premise of terrorism has not changed since the seventies: its goal is still to kill people.” And while the names of the armed groups may change, the story and the mistakes made when fighting them are the same and are repeating.

Over the past decade, Napoleoni has advised various governments on counter-terrorism. And for some time she has warned that “Islamic State is here to stay, and the only solution lies in political negotiation”. So I ask her how she feels when some world leaders insist on fighting the group by announcing further increases in troops in Syria. The response from this spirited, tenacious woman and author of two acclaimed books on the subject (Rogue Economics and The Islamist Phoenix, both published by Seven Stories Press), is surprising: “I’m so tired of this story. I do a job that never brings results. I give talks, explanations, predictions: and no-one listens. They say I only talk about catastrophes and never about anything positive.”

Her voice, which still retains its sing-song Italian intonation despite the fact that she currently lives between London and Montana, USA, is now more of a drawl. “In the seventies, the general public was already dealing with terrorism. Today, people think it will all be resolved, even though the situation is more critical than ever. Society has a very simplistic view of reality and is in denial, living in a dream world, a virtual world”, she tells me, pointing to her mobile phone on the table.

She is not an aged researcher stuck in a longed-for past. Napoleoni has always been critical and candid with her opinions. Now she’s urging everyone to show the same courage. “Civil society’s focus is fleeting because it’s confused. The movement to occupy Wall Street lasted just a few days… Why haven’t we continued to demonstrate? Governments have always been cynical, that’s nothing new, but before society had them under control, yet today it’s as if we don’t care about anything.” And suddenly, she hits me with one of her predictions, one of those that governments, because of the responsibility they have, don’t want to hear: “The situation could get even worse. Today, because of the relationship we have with Russia, the risk of war in Europe is greater than it was ten years ago. We need to be vigilant.” Throughout our entire conversation, I can’t get even a glimmer of hope out of her. 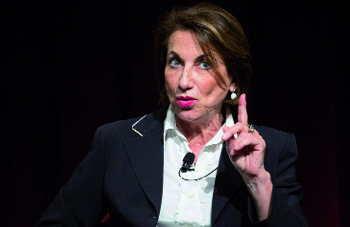 Loretta Napoleoni during her talk in the “D.O. Europa” lecture series, held in October 2016, at the El Born Cultural and Memorial Center.
Photo: Pere Virgili

The business of human trafficking

During her visit to Barcelona, Napoleoni travelled around presenting her latest book, Merchants of Men (Seven Stories Press). In the book, the result of a ten-year investigation, Napoleoni reveals how Islamic State and certain African terrorist groups first made their money in cocaine, but now fund themselves through smuggling, kidnapping Western tourists and aid workers and, since 2015, trafficking in refugees, a lucrative and uncontrolled business. Ten years ago, a person would pay a trafficker US$7,000 to take them from West Africa to Italy, but in 2015 the same sum would only cover the short journey between Turkey and Greece. Of the roughly 3,000 immigrants arriving each day in Europe during the winter of 2016, 90 per cent made it there using mafia gangs.

Napoleoni strongly criticises how governments are peddling “the absurd myth that we’re moving towards an ever more integrated and egalitarian Europe”, while simultaneously displaying a lack of respect for human dignity. While one European government pays €10 million for the release of a kidnapped citizen, someone else is paying €7,000 to pay their passage to Europe and survival. “Today’s merchants of men are no different to the 18th century slave traders, the 19th century colonialists or the 20th century Nazis: they all believed they could do what they liked with other people’s lives.” It appears, then, that we have not advanced that much. In fact, according to Napoleoni, we’ve progressed in one aspect only: “Humankind has evolved only in materialistic, not moral, terms. Nowadays, any action can be justified if you earn enough money. We’re living in an ethical desert.”

Napoleoni does not just base her research on data to highlight the business of terrorism, she also interviews kidnapping victims and the kidnappers themselves, creating direct, striking stories through which she exposes the grey areas in a complex global network. For her, nothing is just black and white; for example, kidnappers, too, are generally “victims of the system”, people for whom criminality is the only life they know, although that is no justification for any inhumane act.

When I comment that it must have been hard to conduct an investigation of this magnitude, she sighs deeply and after a few seconds’ silence, she admits: “I’ve had moments of despair. I’m not working for the here and now, but rather to leave evidence of this madness for future generations. But if the situation doesn’t change, I’ll do something different instead.”

Let’s hope that she won’t need a rethink. If incisive, critical voices like Loretta Napoleoni’s go silent, the reaction we need from civil society to the barbarity she warns us of will be just that bit further away.