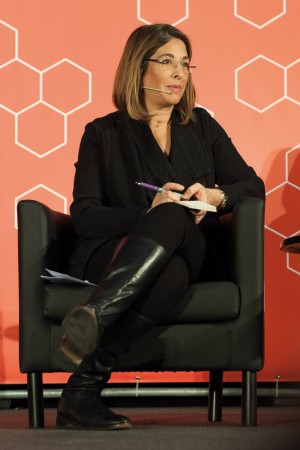 The journalist and activist Naomi Klein (Montreal, Canada, 1970) speaks with an aplomb that conveys conviction and depth. She gives the impression of having thought at great length about a lot of dizzying situations that could lead to immobilism if someone wasn’t prepared to turn them around. And that someone is Naomi Klein, as she shows in her latest book No Is Not Enough: Resisting Trump’s Shock Politics and Winning the World We Need (published in Catalan by Empúries with the title No n’hi ha prou amb dir no and in Spanish by Paidós with the title Decir no no basta) and as she made clear in the event held in Barcelona in November. It was her only talk in Spain during the visit to present her new book. The acclaimed activist and point of reference for the progressive new international movements took part in a conversation with the Mayor of Barcelona, Ada Colau. The talk, with the title ‘Fer front a les polítiques de la confusió i la por: la justícia social com a repte global’ (Facing up to the politics of confusion and fear: social justice as a global challenge), was part of a series organised by Barcelona en Comú on participating in processes of political and economic transformation.

‘There are not many places in the world where people are thinking about alternatives. We know it’s not perfect and it’s no utopia. The role claimed by Barcelona en Comú and feminist leaders is very important in getting rid of this feeling of despair. You’re creating resistance on the ground’, Klein proclaimed, before a crowded Cotxeres de Sants with more people outside.

No Is Not Enough takes a no-holds-barred look at narcotised left-wing parties and spares them no criticism. Klein alarms and agitates. She provides the necessary framework to understand a sulphurous reality and the shocks – there are moments when they are like electric shocks – that governments in the service of the oligarchies apply to the community. In earlier books she had already given shape to the idea of shock doctrine, impacts such as war or disasters used to launch an all-out attack on the public sphere and break down the regulations that ought to protect the community. In this volume she takes this line of thought even further, explaining the reasons for the rise of the ‘Trump brand’, or ‘oligarch chic’. The prepared ground that launched him (discontent, weakened – even if not lower – classes, a no-show rival, social measures not carried out under Obama…), the manoeuvres he relies on (‘chaos and upheaval’) and how he’s emptying and will empty the White House of all its public sense (imposing savage and ruthless capitalism, exploiting oil hand over fist…).

In her description of the ‘amoral billionaire’, when she reflects on his abysmal paradoxes and falseness, Klein spares no punches. She looks the problem squarely in the eye: his ‘climatic vandalism’ at a time when ‘the climate clock is chiming midnight’, his contempt for women and blacks and his search for scapegoats (a red carpet for the extreme right), the ferocious race for lowest cost in everything, the slavering of the unions before Trump when he’s done nothing but take them for a ride; the dream of a planet divided into green zones and red zones (taking her inspiration from the ‘open window on dystopia’ she saw in American-occupied Baghdad in 2003, Klein draws a world with a few secure green zones, only within reach of the uber-rich, while the rest are left wallowing in the red zones, at the mercy of the elements, like the ruins of Baghdad). 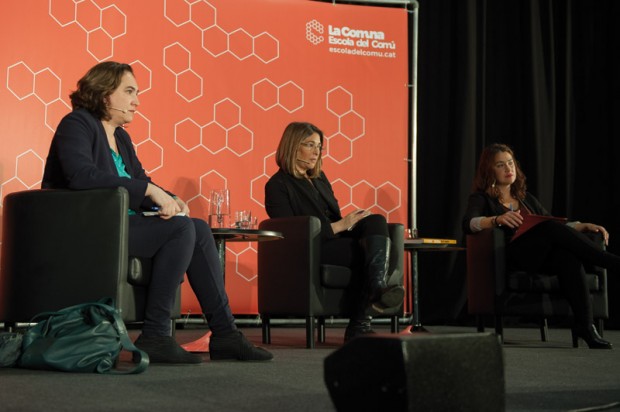 But there are moments when the shock doctrine backfires and people remember and react. It happened in Argentina, in the 15-M movement or the Catalan independence movement. ‘A lot of the things that are happening now, like the 15-M or the Catalan independence process, are community-led and it’s the community that has put us in power in the city’, Colau remembered during the conversation, and she referred to her own activism: ‘The main decisions aren’t taken by the people, not even by the institutions, they’re taken in darkened rooms. This is precisely what was being denounced by the anti-globalisation movement, where many of us were politicised, where we discovered Naomi. At that time we could already see the lack of democracy in formal democracies’. And after that came ‘citizen empowerment’ against the ‘looting and mercantilisation of housing’, which has been ‘particularly savage in Spain’. And now, from the City Hall? ‘We arrived with all the will in the world to confront speculation, to guarantee the right to housing, but we’ve got limited resources, there’s a faceless speculation…’, the Mayor explained. And we need ‘a broader alliance, of more cities, between institutions and the community, to change the rules of the game… Otherwise, it’s still David’s struggle against Goliath’.

Klein urges us to take the leap and turn ‘no’ into ‘yes’. She turns a general outlook full of dystopia inside out to make it a chance to dream of utopias, seen as new realities imagined from the bottom up, from different movements joining forces. We must stop the infighting, we must be clear that we’re facing the same adversary in a whole range of scenarios (climate change, feminism, trade unions, the defence of coloured people’s rights, pro-refugee movements… and identify the causes of every form of Trumpism there is in the world. Having confirmed ‘the limit of the politics of isolated compartments’, taking her inspiration from The Leap Manifesto: A Call for a Canada Based on Caring for the Earth and for One Another, she suggests we leap, as part of a ‘change in the current political atmosphere, because many people realise that the future depends on our ability to overcome painful divisions and unite and take the lead in favour of those who have traditionally been most excluded from society’.

The conversation took place on 9 November, when the country was still in shock at the police violence of 1 October, the imprisoning of the leaders of the ANC (Catalan National Assembly) and Òmnium and members of the Catalan Government and the suspension of home-rule with Article 155 of the Constitution. The terrorist attack in the Rambla in the summer was still fresh in our memory too. ‘Barcelona has been in a state of severe stress for months’, said Colau of this series of events. And of the actions of the Spanish Government: ‘We’re in a state of exception. As well as intervening and repressing defenceless people, what’s such a scandal is that this should be used to threaten the rest of Spain; a message is going out to the whole of the population’. Taking up Klein’s own arguments, she warned, ‘This shock strategy is being used for things that go much further’. For the Mayor, the challenge is ‘how we face up to it and defend our social cohesion’, over and above opinions as to Catalonia’s connection or not with Spain. And Klein, as a result of her experience studying societies in shock, had the final word, a piece of advice: ‘It’s crucial not to falter at a time when people’s rights are being denied. With Trump, all eyes are on his show. Rajoy is an example of this with his own show’.

One thing’s clear. Klein’s gaze is ever alert: ‘There might be complacency about Trump. But what’s happening in Europe is in many ways more worrying. So far as I know, Trump hasn’t locked up any members of any state government in prison, he wants to build a wall, but tens of thousands of people don’t drown along the coast of the United States’. We must leap over all the walls, however difficult it may seem: ‘The shock puts us to the test, we don’t know how things will evolve. There are examples of societies that do incredible things when they’re put to the test’.