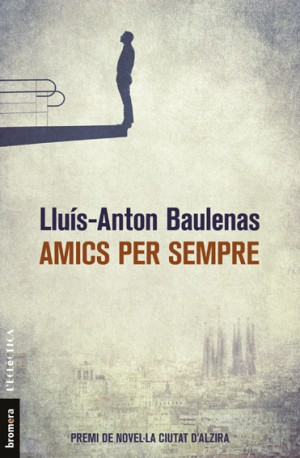 It is in the squares and streets of the Barcelona of 1992 – the city whose Olympic mascot was Cobi, a Catalan sheepdog – where the author sets the story of Ferran Simó, a young man that war, in the words of the narrator, has turned into a dog. Baulenas once again adds touches of magical realism to the novel.

On 1 June 1992, a summer storm rained down on Barcelona and, so too, on the magnetic protagonists of Lluís-Anton Baulenas’s latest novel, Amics per sempre (Friends Forever). Set in the city that hosted the Olympic Games, the characters in the novel – winner of the 2016 City of Alzira literary prize – swing between, on the one hand, the official euphoric atmosphere that brought jobs and international exposure to the entire region and, on the other, the harsh reality of everyday life. They are three young people fighting for their future and, as is only natural, searching for happiness.

The lives of an industrial engineer, a graphic artist and an unemployed archivist become intertwined by sheer coincidence. That same sheer coincidence causes a boy, Ferran Simó, to sustain personal injuries during the tragedy of the war in the former Yugoslavia. His only mistake was to be in the wrong place at the wrong time; it would change his life and follow him, even after he is set free and returns to the Barcelona of the 1992 Olympic Games.

Parading through the novel’s pages are Olympic volunteers, the uninhibited and sometimes illegal passions of individuals wanting to enjoy their sexuality at the margins of social conventions and, of course, the absurdity of war. Wars that, be they in Barcelona’s Plaça de Puigcerdà during the Spanish Civil War, in Poland during the Second World War or in the town of Novo Mesto in Slovenia during the Balkan conflict, always have dire consequences for the weakest and most defenceless, the ordinary innocent citizens. “Would they kill me just for being in the wrong place at the wrong time?” wonders the protagonist. Baulenas explores these unanswered questions with a boundless imagination and a constantly surprising mastery of words and plot. 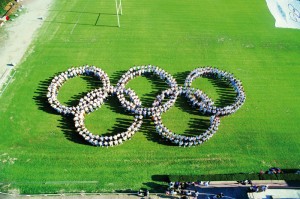 Olympic volunteers in a run-through of the opening ceremony of the 1992 Olympic Games.
Photo: AFB

Long before the so-called historical novel became fashionable, Baulenas had already found his own voice in works that always turn Barcelona into a new and surprising literary setting. This time, a guesthouse in the Barri Gòtic; a tea and coffee shop in Santa Caterina; a car park in carrer de la Princesa; the employment office near the cathedral; a haberdashery in Portal de l’Àngel; the rambla de Canaletes and bar Zurich; the now defunct Bodega Bohemia in El Raval; carrer de Pere IV in Poble Nou; the Rec Comtal; the shanty towns of La Perona; and the old town of Sant Andreu are just some of the urban backdrops against which this surprising literary tale is set. At its core is a love triangle between three Barcelonians who are relentlessly pursued by a mysterious cream-coloured Volvo 940 with a temporary number plate. It is in the squares and streets of the Barcelona of 1992 – the city whose Olympic mascot was Cobi, a Catalan sheepdog – where the author sets the story of Ferran Simó, a young man that war, in the words of the narrator, has turned into a dog. Baulenas once again adds touches of magical realism to the novel, just as he did to great effect in La felicitat (Happiness) in 2001.

Intrigue, sex and historical account are some of the elements that make Amics per sempre an exciting read; page after page, scene after scene, it makes one’s heart race. On reaching the end, some readers will no doubt ask themselves whether they have read a novel or been to the cinema to see another of Ventura Pons’s movies based on the works of Baulenas.

“Sometimes it may be necessary to fully submerge oneself in something in order to try to pull oneself out of it”, says Baulenas, who borrowed the book’s title from a famous 1990s song by the Spanish group Los Manolos, that has now become a motto for the generation of Barcelonians who experienced the Olympic Games from two different perspectives: the official euphoria and the harshness of everyday life.