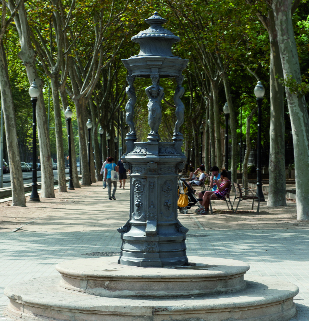 Variation on a Wallace fountain named “de los niños”, likewise made in France and purchased by the City Council in 1875. It can be found on Passeig de Picasso, opposite Avinguda del Marquès de l’Argentera.
Photo: Albert Armengol

In Barcelona only two of the supposed 12 Wallace fountains remain, in addition to the original fountain in the head office of Aigües de Barcelona, the variety known as the “children’s fountain” and some imitations and replicas of no value.

Whatever the reason was for bringing the Wallace fountain to our city, it is worth noting that it is a sculptural work in itself. They are made of cast iron, built from mass-produced pieces, and they were created at the Val d’Osne foundry. They measure 271 cm in height and weigh 610 kg. Four caryatids are situated on an octagonal base, supporting a dome with their hands and heads that is topped by four fish with interlaced tails and the tip of a spear. The figures represent kindness, simplicity, charity and sobriety.

Although they may seem identical at first glance, the four sculptures have details that differentiate them, either the position of their knees and feet, the way their clothing is attached to their chests or their hairstyles. Simplicity and Sobriety have their eyes shut, while Kindness and Charity have them open. They have true artistic value and are executed with all kinds of details: one need only observe, for example, their fingers and toes, where one can even see the nails.

The symbolism is also present on the sides of the base. Of the four largest sides, two show the city’s coat of arms and legends, while the other two only have the coat of arms, as we have mentioned. The other four sides, which look like buttresses and are equal to one other, have at the top part a shell with a string of pearls pouring out of it, which, according to French texts, represent hearing and speech. These four sides also include the female inflorescence and leaves of a plant called a cattail (Typha latifolia), which lives along the banks of calm courses of freshwater, the pools of streams and in ponds. Cattails appear as a symbolic element in many types of fountains in this city and others around the world.

As well as its artistry, another thing that makes the Wallace fountain unique is that a container is needed in order to drink from it, since the stream of water comes from the centre of the dome, through the inside, and the caryatids make it impossible to get your head close enough. It used to be possible to get some water using vessels that were attached by chains joined to the fountain by loops formed by the trunk of a gold elephant, visible between the bases of the caryatids. This system was done away with many years ago as it was considered unhygienic and a small shell-shaped sink with a spout was added to make it possible to drink from. 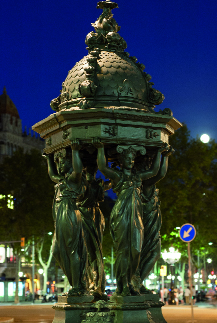 The upper part of the fountain on the corner of Gran Via and Passeig de Gràcia.
Photo: Albert Armengol 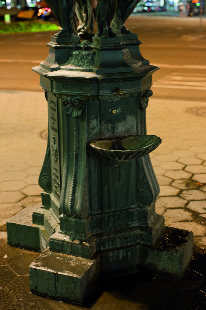 Base of the fountain on the corner of Gran Via and Passeig de Gràcia.
Photo: Albert Armengol

In Barcelona only two of the 12 fountains that supposedly arrived remain, one located on La Rambla de Santa Mònica and the other on the corner of Passeig de Gràcia and Gran Via. The others are imitations and replicas without any artistic quality. There is one other original at the Aigües de Barcelona head office on Carrer del General Batet, the same one that for years was in the gardens of the company headquarters on the corner of Passeig de Sant Joan and Carrer de la Diputació.

Another original fountain can still be found, one manufactured and stamped by the French foundry Antoine Durenne from Val d’Osne. At first glance, it could be mistaken for the caryatid model and it is in fact also called a Wallace. The main difference is that it has four pre-adolescents, two boys and two girls, instead of the four female figures. The boys have short hair and are practically nude; only a fold of cloth covers their genitals. The girls have a ribbon tying their hair back and wear a kind of tunic that leaves their chests uncovered. The dome is very different from the one on the other model, as is the base, which is circular, with a kind of buttress and decorated with floral motifs, without any reference to the aquatic world. The degree of detail and ornamentation is similar to the others. There is only one example of this model, which for many years was in Ciutadella Park and in 2009 was moved out to Passeig de Picasso, next to the park entrance that faces Avinguda del Marquès de l’Argentera. 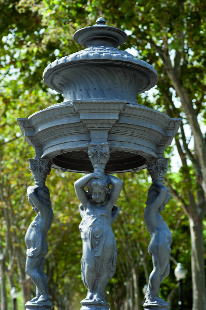 According to Barcelona City Council’s Museu Virtual de l’Art Públic (Virtual Museum of Public Art), the children’s fountain was acquired in 1875, and it is possible that the design was also the work of Charles-Auguste Lebourg, commissioned by the foundry or created from a model rejected by Wallace, as there is a strong resemblance.

There are also various replicas of Wallace fountains on our streets, mere imitations without the artistic quality of the originals: where Gran Via crosses Carrer de la Marina, where Avinguda Diagonal meets Carrer de València and Carrer de Roger de Flor, and on La Rambla, near Plaça Reial.

Wallace fountains are pieces that help to strengthen cultural heritage in public spaces, and they help us interpret and read time in the city’s landscape. At the same time, they unite us with other cities in Europe and the world where modernity was pulsating in the late 19th and early 20th centuries.

Wallace fountains: between romanticism and marketing 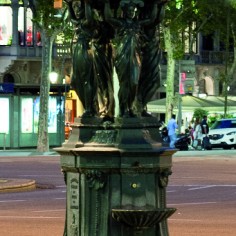 Major changes to Barcelona’s water supply in the second half of the 19th century brought a huge rise in the number of drinking fountains. Against this backdrop, fountains in the style of Paris’s emblematic Wallace fountains became part of the city’s heritage. 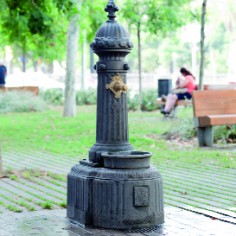 The most characteristic and common fountain on our streets belongs to the Barcelona Series, sold under various names relating to the city: it has become a true urban icon