The Associació de Pessebristes de Barcelona (the Association for Nativity Scene Makers in Barcelona), originally founded in the middle of the 19th century (1858 or 1860) as the Societat Pessebrista de Barcelona, was reconstituted on 16th October, 1921. Their founding aims were to encourage and promote the making of nativity scenes so, from the very beginning, they organised courses, visits and talks to spread the pessebre tradition. Every year, for example, they organise a public competition open to the city's children, teenagers and young adults, aged 10-21. The prize-giving ceremony brings the season's activities to an end.

The association collects and conserves items and documents relating to pessebrisme, such as figures, posters, Christmas cards, prints and photographs. In fact, the association has a committee working on a project for a future museum where all this material will be exhibited For the moment, part of it is on display at their centre on Carrer dels Lledó.

The association has also built up a library of books, articles and press cuttings about nativity scenes. Naturally, it stocks its own newsletter too, and the books produced over the years about the association itself, the art of making nativity scenes and the materials used, for example La construcció de pessebres (1931) by J. M. Puig i Roig; El arte de construir el Belén (1946) by Antoni Herranz; La Asociación de Pesebristas de Barcelona (1954) by Eveli Bulbena; Consells de Pessebristes (1957) by Antoni Moliné; Temes arquitectònics i materials emprats (1969) by Joan Marí; and Com faig el meu pessebre (1995) by Josep Petit.

In 1952, during the 35th International Eucharistic Congress, the Barcelona Association pushed for the setting up of a Universal Federation of Nativity Makers. The constituent meeting of the Universal Federation took place at the 1st International Congress of Nativity Makers, which was held in the City History Archives building. This International Congress was held in Barcelona again in 1957 and 2002, as well as in 2012, for the 150th anniversary of nativity scene making in Catalonia. 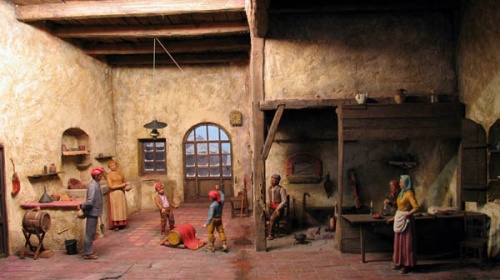