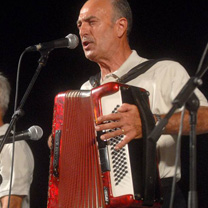 The accordion is a wind instrument with hard metal reeds, bellows and a keyboard. There are two broad types of accordion today: the more primitive diatonic version and the more developed chromatic version. In folk music, especially music with roots in the Pyrenees, the diatonic accordion is the most traditional and most widely used type.

Technically speaking, its distinguishing feature is that it only produces the sounds in the scale it has been tuned to produce. That restricted the variety so changes were gradually introduced during the nineteenth century, the golden age of the accordion, that eventually led to the much richer chromatic version. Consequently, in the course of the 20th century, the diatonic version became obsolete and virtually disappeared.

But in the 1970s it began to be revived, a process that was very closely linked to the organisation of the first specialist festivals and gatherings of accordion players, such as the Trobada d'Acordionistes del Pirineu d'Arsèguel. In fact, all the new music based on tradition is composed to be played on a diatonic accordion.