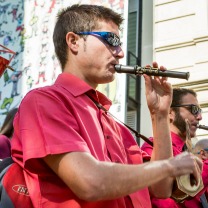 The flabiol is a woodwind instrument with a bevelled mouthpiece that belongs to the flute family. It is a typical instrument of the cobla, a folk orchestra in which the flabiolaire plays it with their left hand while beating a tamborí, a small drum hung over their left arm, with their right hand. In the cobla it is used for the traditional introductory notes and breaks in sardanes. Although it generally does not play a prominent role, composers often give it small decorative parts or rural-sounding passages.

It is usually made of ebony and between 22 and 25 metres long. Normally it has eight holes, five at the front and three at the back, that the flabiolaire covers and uncovers with their left hand to produce the sound. Three keys were added at the end of the 19th century to improve the range of sounds and Josep Plans came up with a fourth key in the 1950s. In a cobla, the flabiolaire also plays the tamborí and sits on the left of the front row.

The flabiol has a very long history in Catalonia. Shepherds played simple, festival versions where the length and number of holes varied widely. So it is one of the most representative instruments of Catalan folk music. Over the years it has been used by groups of jugglers and minstrels, cobles de tres quartans (a trio with four instruments), mitges cobles (duo) and flabiol soloists accompanying giant dances, figures and chants.