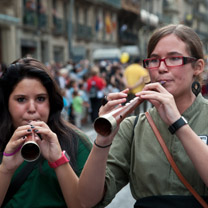 The gralla is a wind instrument comprising a 30 cm long wooden tube that amplifies the sound produced by its double reed. There are two types of gralla, the seca (dry) and the dolça, (sweet) which are distinguished by their sound. The gralla seca is more primitive and has a harsher sound; the gralla dolça has metal keys that increase its register. The gralles traditionally have percussive support from the timbal drums.

Similar instruments to the gralla can be found around the world and it is therefore considered to be very old. It is historically from New Catalonia, and accompanied specific dances and entertainment, like moixigangues (Christ's Passion dances), balls de gitanes (Gypsy dances), balls de valencianes (Valencian dances) and, later, the human tower builders, the castellers. With the appearance of the gralla dolça at the end of the 19th century, both its use and repertoire became established. Even so, at times the popularity of the gralla has gone into decline, and it has been kept alive thanks to the tradition of human tower building.

Today it is the unmistakable accompaniment to the castellers, popular dances, and the giant festival figures, the gegants. The gralla came back into favour at the end of the 1970s, thanks to a general movement to recapture traditional and popular Catalan culture. At that time, it was taken up further afield than its traditional geographical limits and it began to be heard throughout the country. At an instrumental level, the gralla is living a golden age, due to academic recognition and its pairing with other instruments and styles, which take it beyond traditional rhythms.

Parts of the gralla

History of the gralla