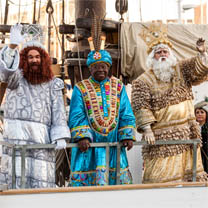 The Gospel of St. Matthew is the only place in the Bible that tells of the arrival of the Magi, following a star to find a baby that would become the Messiah. As the original was probably written in Aramaic, the Greek tradition of the word "Magi" is confused and can have various different meanings and nuances. For example, it can be translated as wise man, man of science, wizard, or mathematician.

This text also makes no mention of how many Magi, or Wise Men there were, and does not name them. It only indicates two remarkable symbolic elements. Firstly, that they come from the east, where the sun rises. In other words, they bring light. Secondly, that they bring offerings to honour Him: gold, incense and myrrh. The gold they offer to He who has power on Earth, a man; incense, which rises, is a reference to His divine honour; and finally myrrh, an aromatic product that was used for embalming, and reminds us of the Messiah's mortality.

In the 4th century, the number of Magi was fixed: three, because of the three presents. Later, they were given the names of Melchior, Caspar and Balthasar. The first reference to their names is found in Sant Apol·linar el Nou, in mosaics from Ravenna.

Melchior is represented as an old man with a beard and long white hair; Caspar is a middle-aged man with blond hair and beard; and finally, Balthasar is a black king, incorporated into this tradition in the 14th century and totally accepted by the 16th. Some see this iconography as being the different parts of the  known world and others believe it represents the ages of man.

The Catholic Church celebrates the solemnity of the Magi, or Epiphany as it is otherwise known, on 6 January. On the eve of "Reis Mags", 5 January it is traditional for the "Kings" to arrive in towns and villages, bringing toys, sweets and other things for the children.

These days the Reis are received in cavalcada parades, a relatively recent tradition. The first ever was held in Alcoy in 1885, and in Catalonia they began in Igualada, in 1895. In some places they are received with torches and lanterns, a remnant of an ancient custom, when children used to go to the forest, beach and other places to signal the path and light the way so that the Wise Men did not get lost.