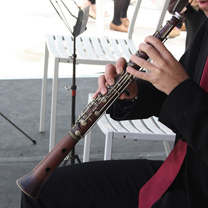 The tible is an oboe-like woodwind instrument from the shawm family. It has a double reed, a conical body and is around 50 cm long. It is one of the most characteristic instruments of the cobla music group because of its sharp, high-pitched sound, particularly appropriate for being a soloist. It is made up of three pieces of wood, normally from the jujube tree, a fairly rare Mediterranean shrub. The upper and central pieces have keys and the bell has four resonance openings.

It first evolved in the 19th century from the traditional tarota, one of the basic instruments that made up the cobla de tres quartans music group, together with the fabiol flute, the tamborí drum and the sac de gemecs bagpipes. The main change was the addition of a set of keys, similar to those on other woodwind instruments. This meant that the tibla adapted perfectly to the cobla reforms implemented by Pep Ventura in 1850.

Within the cobla, its role is to complement the tenora, and so in certain compositions it is very typical for there to be a dialogue between the two. It would seem that the word tible is derived from tiple (meaning treble or soprano), which is the old name for the highest-pitched instrument in polyphony. In the cobla there are two tibla players, the tiblaires, who sit on the first row with the rest of the woodwind instruments.