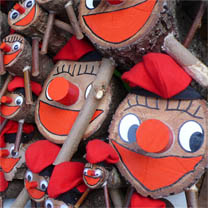 A tió is a thick section of tree trunk for burning; it is the basal, or supporting log, on which the others are piled. It has many other names which include tronc, tronca, soca, rabassa, and conco del foc.

The tió is a central part of the most current and yet most ancient of today's Christmas rituals. The tradition is more or less the same everywhere. Some days before Christmas, these logs appear, and they do so in a variety of unusual ways: some fall from the sky, others materialise in children's beds, and sometimes they are found in the middle of the street, waiting for a family to adopt them. When the tió is at home, he begons his fattening up period, with a very diverse diet: straw, carob, biscuits, mandarins, crusts of bread, and orange peel. It can be anything, so that when the day comes, he will return everything he has eaten by expelling presents.

The magic moment arrives on the day he is made to "poop". Today, group defecations take place in schools and associations, days before the festival. In homes, it is usual to make him produce his scat on Christmas Day, or Christmas Eve: each family does it according to their own traditions and necessities. Before making the tió discharge his stools, the children usually go to the pessebre, the nativity scene, and sing carols; some also heat up sticks, or wet them, so that his bowel release will be better. When the moment comes, the kids, armed with their rods, begin hitting the tió, hard, while singing a little ditty, of which there are multitudinous variations according to the part of the country, family origins, and so on. When the beating has warmed him up nicely, the little ones lift up the blanket he is covered in to see what he has produced. The tradition is that, among other things, his number twos include the Christmas desserts, the rolled neula biscuits and nougat-like torrons.

The tió originated in the countryside, and symbolises abundance: the entrails of an old dry log give out sweets and other delicacies. It is the sign of nature's rebirth after the winter season. With the passage of time, and the diasappearance of fireplaces in homes, the custom of burning the log after it has done its business has also vanished, as has the use of its ash to protect against lightening and insects in the rural houses. Nowadays, the tió have become urbanised and has transformed into an amusing element of Christmas imagery, dressed in a traditional Catalan barretina hat and with a smiling face drawn on.