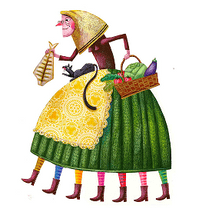 La Vella Quaresma, or Old Lady Lent, is a graphic representation of Lent, the days between Ash Wednesday and Holy Week. The penitential period within the Catholic liturgy; it is a time of fasting and abstinence, something which is commonly known as fer magre, or being lean. All in all, it involves strict self-discipline in preparation for Easter.

It is not surprising that this epoch, full of reflection, repentance, self-examination and sadness, is represented pictorially by an old battleaxe, with a nasty look about her and a sour face. Her unique features are her seven legs, sometimes they are seven herrings, and the fact she is always carrying a cod and a basket of vegetables, normally Swiss chard.

She is often seen in popular printed images and she works like a calendar: her legs take us towards Holy Week. The ritualisation and use of La Vella Quaresma has local variations, but there are always certain things in common. Each week we pull off or amputate a leg, and at the end she is burned, just like her predecessor, El Carnestoltes. In this way fire symbolically destroys the period. In some places, when the halfway point of Lent is reached (in the fourth week), the old lady is cut in two. Groups of children collect money or food and, to the rhythm of a song, pretend that they are sawing up a cane or an image of Old Lady Lent. They organise a group tea with the proceeds.

There are ancient depictions of La Vella Quaresma made by engravers, using techniques such as xylography, and later, lithography or intaglio. These artists used the folklore of Lent as a way to show off their mastery. But many images are also humble and easy to make: a simple newspaper figure. As a sales tactic, the fishmongers and salted fish sellers make a similar calendar to the old lady, using a dried cod with seven small codling or herring hanging from it.

Nowadays, even though the secularisation of society means that Lent has lost its intensity, La Vella Quaresma keeps going strong and takes on new forms and celebratory practices. Examples include S'Àvia Corema in Maó and Serra la Vella in Ullastrell. In both places they have a geganta, a festival giantess, depicting La Vella Quaresma, a transformation which ensures the survival of this character. There are also schools which adopt this figure between Carnival and Holy Week, to work on various different parts of the educational curriculum.

The names and symbols of Lent. Festes.org