The Bastoners del Poble-sec were officially constituted on 15th January 2003, as a section of the Esbart Dansaire Renaixença. But this traditional dance group had been performing balls de bastons since they were founded in 1988.

The bastoners are split into two age groups: children, aged 6-12, and a youth group, aged 13 -25. Their repertoire includes traditional dances as well as their own creations and others which are specially arranged.

When they dance they wear a waist sash, an overskirt, a headband and bell pads, all of which red. The long mocador they tie round their back and chest like a sash is red too, with a flower pattern.

The Poble-sec colla have travelled to festivals in England, Italy, France, Portugal and Belgium, as well as appearing in lots of towns round Catalonia and in other Catalan-speaking lands. They've taken part in many bastoner gatherings, in Moià, Terrassa and Cambrils, for example, plus meetings, festivals and cercavila street parades in Barcelona – Gràcia, Ciutat Vella, Raval, Nou Barris, Poble-sec – and elsewhere – like Espluga de Francolí, and Cotlliure (North Catalonia, in France).

Aside from all these dance exhibitions, the group has given short courses to folk clubs and descendants of Catalans in Cuba, as well as in schools. Every two years they organise the Festival Internacional de Música i Dansa Tradicional in Poble-sec, the Festival Folk Infantil i Juvenil  and the Festival de Claqué al Carrer, a street tap-dance festival organised in collaboration with tap-dance association Tot pel Claqué. 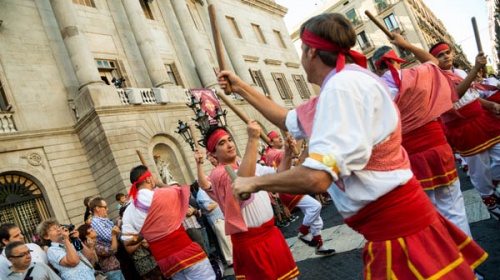