The Bastoners del Casc Antic were set up in 1983 as part of the Esbart Espiga d'Or and, since then, they have belonged to this association, along with the adult group and older dancers. After a period of crisis, the group took off again in 2008, thanks to the interest of the Espiga d'Or's younger members. These days they perform on their own, as well as with all the other dancers. They also take part in the La Mercè festivities and the festa majors of the Sant Pere, Santa Caterina i la Ribera neighbourhoods.

When they can use a sound system, the musicians accompanying the Bastoners del Casc Antic play flabiol flutes but for street dances and on the cercavila  processions, the group dance to the sound of another Catalan instrument, the gralla. The group's colours are blue and yellow. That means some dancers wear a blue waist sash, a yellow mocador placed diagonally, and a yellow overskirt, both with a blue line round the edge, while the others have the colours the opposite way round: a blue waistband, a yellow sash and a yellow overskirt with a blue line.

One of the biggest events this colla bastonera has been involved in organising was the 24th Trobada Nacional de Bastoners. This national gathering, held in Barcelona on 23rd May 2009, attracted over 2,000 stick dancers. Apart from helping to organise it, they also played an active role in the events running up to it, such as the Diada de Bastons a l'Escola, a day of stick dancing in local schools, and the Diada del Compte Enrere, when each group took part in a cercavila round their own neighbourhood with a group from somewhere else in Catalonia. 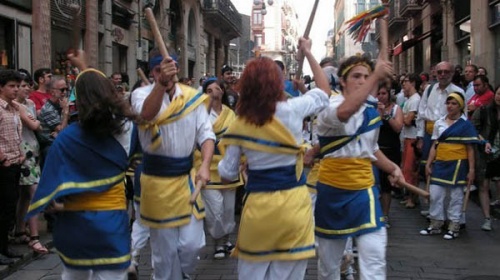 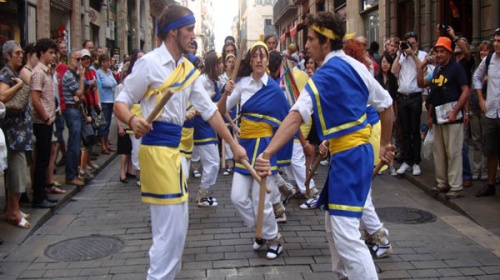