The Colla Bastonera de Sants was set up in 2004 by a group of young people with social concerns and an interest in reviving Catalan popular culture. Up to that point, the Sants neighbourhood had never had a group of stick dancers. The organisation works as an assembly and plays an active part in the life of the neighbourhood, in acts such as the Catalan language campaign Correllengua, the communal calçotada (a meal including charcoal-grilled onions dipped in a romesco sauce) and the Festa al Carrer, a street festival that brings all the district's colles together. In 2009 they helped organise a national gathering of stick dancers, the 34th Trobada de Ball de Bastons de Catalunya. They are also involved in the Festa Major Alternativa, the alternative festival for which they organise the cercavila "CremaPicaPuja" with the neighbourhood's diables and castellers, the devil and human-tower groups.

The members of the Colla Bastonera wear a red waist sash and green overskirt, which is a reference to the Esperanto movement. The green comes from the local sports club, Unió Esportiva Sants, as do the three lines round their badge, representing the three streams that used to flow through the old town of Sants. At the moment they don't have a pennant and they don't wear a mocador sash.

Their dance repertoire has gradually evolved. At first the choreography was mainly in the Garraf style, because a dancer from Sant Pere de Ribes taught them their first dances: the "Creus" (Crosses), the "Dalt i Baix" (Up and Down) and the "Passar i Rebatre" (Pass and Parry). Slowly, though, they have expanded their repertoire with the dances of other groups and creating some themselves, such as "Sants es Creua"Calandreta" and "Patró foradat".This demonstration of Catalan culture has taken them beyond the city and Catalonia to other Catalan-speaking lands and countries such as Occitania in France, the Basque Country and Palestine. 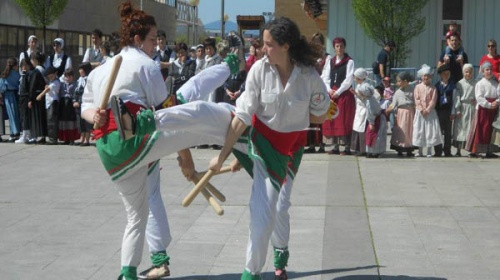 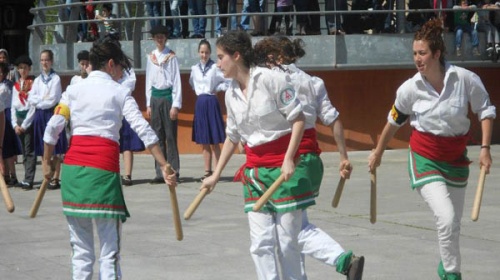