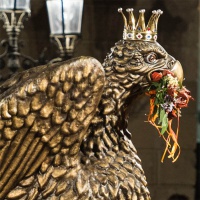 Built in 1999 by
Xavier Jansana

The Àliga, or Eagle, of Barcelona is one of its historical animal and mythological figures, together known as the Bestiari Històric. Alongside the Gegants de la Ciutat, the two city giants, it is Barcelona's highest official representative.

The history of this figure dates back to the 14th century, when it was already being documented. But its golden age was in the 16th and 17th centuries, when it took part in official acts, ceremonies and festivals as a city representative, provided a member of the Municipal Council was present. It also enjoyed the privilege of being able to dance inside churches and paraded in front of the Custodian of the Eucharist in the Corpus Christi procession. Some people think that the eagle symbolised St John the Evangelist who, since the Middle Ages, has been portrayed as an eagle in religious icons.

It was an enormously popular figure to begin with but from the 18th century on, with the Nueva Planta Decrees and the subsequent banning of the short festive farces or entremesos, its privileges and spheres of activity were gradually restricted. As time passed it gradually lost its fame and symbolism and the last reference we have of it comes from 1807, at the festival to mark the canonisation of Sant Josep Oriol, in a performance of a very decadent entremès.

The Àliga of Barcelona we have today was built by the artist and image-maker Xavier Jansana in 1999. Prior to that there was another, made in 1989 by Manel Casserras i Boix, at a time when the Ciutat Vella was reclaiming its festival imagery. The Associació de Festes de la Plaça Nova was responsible for that and the Àliga was presented at the Plaça Nova Sant Roc festivities that year.

Since 1993 it has formed part of the popular retinue of festival giants and other figures, the Seguici Popular de Barcelona, and today it still leads the animals, alongside the Lleó, the city's lion.

Barcelona's eagle has its own dance, based on an old tune that was found in the Santa Maria del Pi parish archives and called the Ball per a ballar l’Àliga de Barcelona - the Dance for dancing the Eagle of Barcelona. This musical composition is very similar to the eagle's dance at the Patum de Berga.

In 1998, the Plaça Nova Festival Association officially handed the eagle over to the city and since then it has been regarded as a municipal entremès figure. It has its own protocol and represents Barcelona as required. The Àliga occupies a privileged place in the city's festive calendar, especially the La Mercè and Santa Eulàlia festivals.

When it is not out on the streets, it can be seen at the Palau de la Virreina, where it is on permanent display.