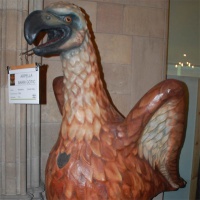 Built in 1989 by
Manel Casserras i Boix

The Arpella (Harrier) is a sea or marsh eagle and one of the Barri Gòtic's popular animal figures, used in the correfocs (fire runs) as well as for festival entertainment. Its mobility and shape, plus its firework-flaring mouth and tail, make it an attractive, fun and participatory figure. Because of its size, it takes five people to carry it.

Manel Casserras made the Arpella out of wood and fibreglass in 1989, as Barcelona's eagle. Then, in 1998, when Xavier Jansana made the city's present-day eagle, this one was turned into a bèstia foguera, literally a "fire creature", for the Plaça Nova Festival Association and that is what it is today.

From the beginning it has been possible to see it at the Sant Roc, Santa Eulàlia, Sant Jordi, La Mercè and other Barcelona festivals. Among the drummers in the firework displays, alone or accompanied by the mythological Víbria, the devils and the jugglers of the Barri Gòtic. Sometimes the Arpella takes to the streets with the Pessigolla grallers, or shawm players, to take part in processions, musical street parades and festival entertainment activities of various kinds, very often with the capgrossos (big heads) and xanquers (stiltwalkers).

Today this popular figure is displayed at the Casa dels Entremesos and, aside from the La Mercè festivities, it takes part in parades and gatherings of festival animals in various places. In fact it has taken part in pyrotechnic and other festival entertainment in Arenys, Blanes, Figueres, Malgrat, Palma, Perpignan, Sant Pol, Vilafranca del Penedès and so on. The people there often haven't had enough with one visit and have asked for it to come back.